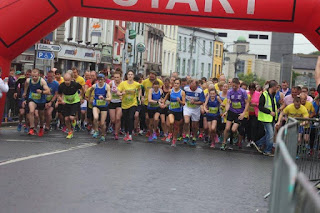 I was originally down for the Ultra here but recent form dictated that I would have been out there all day and probably last so I dropped to the Marathon.

This was my 3rd marathon (2 other half's) at Longford and it is one of my least favorite routes. It is dangerous, fumy and boring. Apart from the course the logistics and start finish are great. There is also normally a great T shirt, goodie bag and medal. Previous efforts seen a 3:52 and 4:00. But with recent form, I thought I would be lucky to break 5hrs today and that was my goal.

Weather was due to be good and I arrived in plenty of time. Unusually a lot of the marthoners had gone off with the walkers and I hardly seen anyone I knew all day. That was a really bad thing as a 2 hrs early start in my opinion makes a mockery of the event as a race and its more a day out.

I started with the half marathon at 10am and was in trouble from the get go. The first number of miles were clocked off between 10 and 10:30 on very non descript roads that had lorries and cars flying at 100-120km/h against you. I quickly lost the 4:15 pace group and was pretty much on my own for the rest of the day. Once the half marathoners passed me and diverted onto their own course it got very quiet. I had no gels with me and with only water on the aid stations I did run a little short of energy.

I was through 10 miles in 1:43 and half way in 2:16. This still isn't good but certainly significantly better than in recent weeks. In fairness its a fairly easy course be it run predominantly on the hard shoulder of busy roads that at its narrowest is very narrow and dangerous.

Once you leave the town after a first small loop any support that was there disappears and in general its a very atmosphere-less race. As I slowed in the second half  it became clear that at 20 miles that I would be struggling to make 5hrs and despite trying really hard and quickening over the last 2 miles I came in after 5:09. There was unfortunately no chip time and gun time is the official time and it was 5:10:11.

I was also disappointed in the finish area as even though I finished in circa 5hrs which isn't fast, but not slow either, the course was being dismantled and there was no-one there at all cheering runners home. All the relay runners and faster guys had long since retired home or to the bar. This normally doesn't happen in races with most runners being supported home. I really didn't like that.

All in all it was another disappointing experience and I say this every year but this will be my last Longford.