I chose this event quite a while ago for my milestone run. My son is severely autistic and Denzil and Franky have been working tirelessly over many years to raise awareness of families living with autism. So I thought it was right and proper to support this event.

This was a sporting festival of a weekend, with lots of triathalons and duathalons and running happening. This was all based at the Lilliput adventure center just outside Kilbeggin in Co Westmeath. Some guys even managed double full Ironmans over the weekend. I believe there was over 600 events completed of some nature over the weekend. 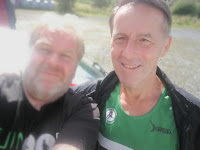 I decided to run on the 3rd day which was a running day only. Again I was in Galway and a 1hr 20 min commute got me there. I was surprised when I arrived that there were people already on the course as the word the previous evening was there would be no early start. But nine had gone out. My own start was 11am with a half marathon (and I think a 10K and maybe even a 5K) also going off later.

My lists had been verified and MCI did a lovely presentation through Vincent at the start of the race. At 11am we were off. After 1 mile I was forced to walk. It was a very flat course on just over a 5K loop and I was struggling to get around in under 40 minutes. 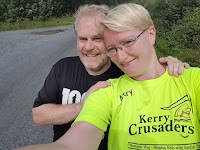 Quite a few were doing their 3rd marathon in 3 days and I was predominantly along with these. I quickly lost touch with Dave Brady who was doing his 675th marathon and was on my own, barely keeping ahead of walkers at the back (be in Humphrey who has improved enormously because of Theresa Grimes tutelage). 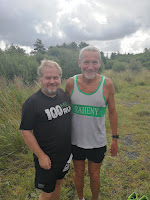 There was a very well stocked aid station every 5K and there was a lovely touch when several cars drove around giving out Ice Cream. Gerry Ford in particular must have had at least 4. I spent quite a bit of time with Theresa talking about things particularly 52 in 52 and eventually I caught up with the group doing the 3 in 3 who were delighted to get around their 78 miles for the weekend. There was also someone doing their 1st marathon who smashed his 5hr goal. There was also an interesting young girl quietly going around with a 10Kg back back. On quizzing here she let me know she was training for a 5 day 250km ultra in Chile the following month. 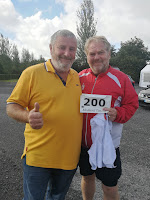 There were some nice moments like when Jill stopped me at half way and presented me with some bubbles and I got some nice selfies with some old freinds. 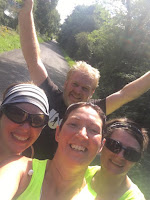 I kept rocking along enjoying the day out despite the slowness and the pain. Everyone at the back was fishing for a joint finish but I decided to push on and came in 5hrs 26 mins (and I worked hard to get that). The rest all came in together.

I had a few more photos when I crossed the line and I really enjoyed my day. Luckily again there was just over the 25 finishers for a counting event.

Afterwards there was a lovely burger, cup of tea and lots of rolls and bikkies. It was good to catch up with Leslie again.

It was back to Galway for me and a great day.