This is the second time I have taken on this tail run. The first time I was in better form regularly running sub 3:45 and managed this one in 4:10 and a top 30 spot. However I was nowhere near that at the moment and can barely break 6 hrs. I had 6hrs as a goal but didnt even get close.

It is a long single 27 mile loop trail with lots of elevation and lots of very rural running. There was also a 50K option and a half marathon and an unusual 33K option.

I had dropped down from the 50K to the marathon as I have a lot on. I knew I could do it in the very generous cutoff time but didn't fancy it today. I turned up early and got the transfer done and number picked up. Administration was very slick. There were plenty of toilets and plenty of food vans. Free parking is always a bouns. There were lots of 100 mc members around and it was due to be a scorcher.

The 50K was off at 9:30 and we were off at 10am. The first mile is through housing estates and very tight, pretty much immediately however you are down to single track and up up up on a steep hill that leaves you overlooking a Motte and Bailey and lovely views over Salisbury. I was pretty much at the back at this stage. After 5K Brenda came passed and disappeared into  the distance. She would finish sub 6hrs which is great improvement for her. 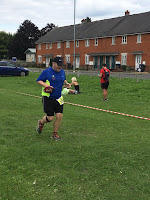 There were many well equipped aid stations every 5K or so and it was well marked (for our race anyway) and the marshals were great. For the shorter races however we saw a few incidents of people going wrong and having to run back to get back on their course.

There were many hills and I found it just as hard to run down them as up. In fact I gained ground on the field on the up hill stretches and they came flying past me on the downhill bits.

We went through some lovely villages and estates and Longford castle is always a standout. This is a real pretty course and very runnable except for the last 10K which crosses many busy roads and we run through the middle of Salisbury after passing the cathedral and the run to the finish can be quite confusing.

I survived it however and had a nice day out.