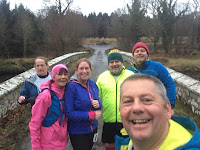 OK there was no denying it this was a crap run. It wasn't helped by the weather being awful and freezing and wet all the time.

It was in the car at 4am to get north to the venue for the 7am start. I had breakfast in the car and decided to go via Belfast. It was a quick run up and I was in the car park at Shanes Castle by 6:10am in plenty of time to get my number picked up. There was a cotton T-Shirt on offer which I don't mind as I have plenty enough technical T's. I thought they could have been a bit more inventive with the design or maybe the bar had been set too high with the very high quality of the LOS T shirt last year. There was also a buff and a protein chocolate.


The facilities were Ok, a hall with a toilet block attached was HQ for the day. 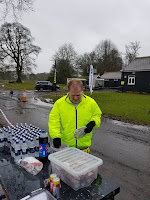 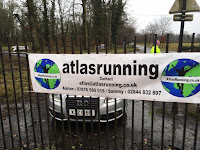 Anyways 20 mins sleep in the car we were all on the start line with 6 early starters from the marathon and we were off. Now this is a Game Of Thrones film set and they were due back for filming the next week but this was no where near as commercialised with tours as Tollymore or Castleward. We had the grounds to our selves. There was a half, full and Ultra on the same 13.1 miles loop around the grounds.

We actually started the loop climbing quite steeply into the forest. Carefully over 2 cattle grids brought us to the nicest portion of the run through the forest. It was muddy enough and got muddier as the day went on. We briefly skirted the North shore of lough Neigh before crossing the river (dont know the name) on 2 spectacular bridges, one of which apparently featured in Game Of Thrones. Between the bridges there was a long drag up the hill away from the river before dropping back. Crossing the river we came to the mid course aid station which had water, jellies and a very encouraging Marshall who was there all day. Turing right now on a concrete path we wound our way through open fields with mature trees on both sides. 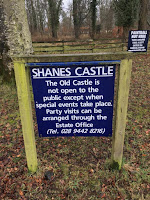 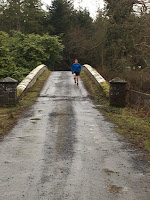 This eventually led to a farm crossing where we turned right and ran a small loop around some farm land before re-tracing our steps on the concrete path back to the mid-race aid station. Keeping on straight we climbed up beside the motorway. It was a long drag that took us over another cattle grid and onto tarmac which seemed to go on forever before we came to the main gate of the castle (really a big house). Exiting the grounds past another aid station, we ran along the estate on the footpath for 1.75 miles (mostly gently down hill past the sign for Milltown and the sports hub before entering the estate again by the back gate. Now on one of the main estate roads we wound our way for the last mile back to the start finish area where we were timed and there was another aid station.

The weather was very damp and cold and wore us all down as the day went on. It was 3 laps for an ultra. I came through lap 1 in 2:25 and was OK. But pretty much immediately I went out on lap 2 my right foot got very sore to the level of I was reduced to a walk (this worried the crap out of me). I nearly turned back to change my shoes but persisted. The next 5 miles were agony before it eventually eased. At this stage it was raining hard and at times we had a cold wind into the face. It was really miserable. 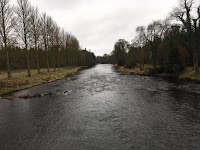 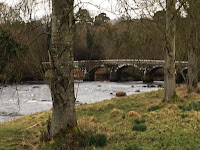 As I had slowed a lot it was a 2:55 second half bringing me in for marathon at 5:20 odd and I felt quite brave going out for a 3rd lap. My foot had eased at this stage but I found it difficult to run and had a slow walk/run strategy for the third lap which was painfully slow.  I was pretty much on my own for this lap and dug deep to get home for a very slow and disappointing 8:50. A full 2hsr 20mins slower than my PB be it in atrocious conditions on a much more difficult course. 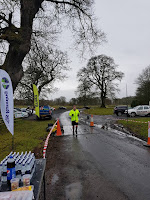 There was beautiful soup at the finish line and as I was one of the last home it was pretty empty. It was good to meet up with Collette and Linda afterwards.

I drove straight back to Dublin. I was a long day.