Ballina  Day 1 of their running festival

So this was my second ROI marathon in a row after a small break. That brings me to 91 ROI marathons and approaching the milestone of 100 marathons in 2 countries as I already have England cracked. Now that will be a very small club. It was also designated as a road Marathon which brings my Road marathon total to 90. In fact, Ballina AC tell me that this is also deemed to be a Boston Qualifier.

Ireland is still in the middle of a heat wave so it was forecast hot and humid. As it turned out I consider it warm at 24 degrees but it was very very humid. That slowed down things enormously but it was nowhere near as bad as it could have been and in general was quite pleasant. Some even reported a short episode of drizzle at one stage though I never saw it.

An unusually late 12 noon start meant that we were to run through the heat of the day. 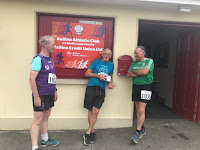 I spent the night in Galway and drove the 1hr 30 mins to Ballina. It was more than a running festival as there were loads of things happening in the town over the weekend as part of a greater festival. Ballina was a busy place. I'm not sure I have ever been there before.

I easily found my way to the very nice Ballina AC track that had only been laid in recent years and registered. At registration was my old drinking buddy Maighread (who was there for the weekend) and a plethora of the usual multi marathoners. 16 started on day 1 with the same number for day 2. It was a small event. There was a small relay event also on Day 1.

The course was a 2.4km short loop followed by 5 x 8km loops. 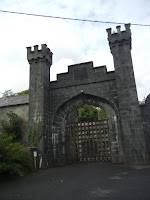 We started on the dot of 12 running through the gates of Ballina Castle (very nice). I settled in near the back as I didn't really know the course. We left the track and headed towards the river Moy and followed the main road beside the river into Belleek woods. The whole course was on tarmac with those sections out of the woods on open roads with traffic (though in fairness the roads were very quiet). About 800m into the woods we ran around the duck pond and wound our way out the woods. About 1km on open road brought us back to the track and the very well stocked aid station.

The longer lap brought us back into the woods but this time we went on past the duck pond and climbed steadily for about 1 mile to the woods end. Parts of this were reasonably steep but runnable if you had a mind to. At the top of the hill was another water stop. Turning left we went over some undulating
roads (but generally up) until we reached the main road after about 2k. Turning left again we ran on the main road for 400m before turning down a side road. Generally downhill now to the finish brought us back to the track.

It wasnt the best signposted course I have ever done and I was unsure on the first lap at the duck pond and also on the turn off the main road to the minor road (waited for a few behind to catch up to be sure).

Initially I was running with Maighread for  the first 5 miles but she pulled away when I had to have a toilet break. I never seen her again to the end. I did however fall in with Jimmy Nugent and Dan McCarthy for a period were Jimmy as loquacious as ever recounted how MCI originally started off. They pushed on and I settled into a run/walk strategy. As there were very few in the race only Sheila and David Brady passed me on the next lap and they headed off into the distance going steady. Ger Fay passed my on the next visit to the woods and I was left pretty much on my own. I guessed I was at the back of the field.

It was surprisingly hilly. I got a bit worried that they were going to run out of water but on lap 4 stocks were replenished and there was plenty for everyone.

Of course a couple of the fasty's lapped me (even twice) but they were far and few between with most people over 4 hrs 30.

It was only in the last mile that I saw a few ahead. It was Ger,  Jimmy and Dan (on his 24th Marathon). I caught them and we all came in together.

We got a medal and a visor as an award. Maighread and David were there to welcome us in and I didn't stay around too much as it was back to Galway.  Lovely to have a cup of tea and a sandwich as well and I love that about these small club events. There was also showers and a massage if you wanted.

It was a nice day but very few photos of the day and results are not published as of yet.

Stats for today: Note I forgot to charge my Garmin so it gave up early and only registered the first 12 miles odd.