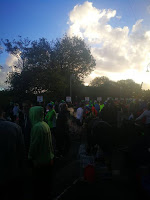 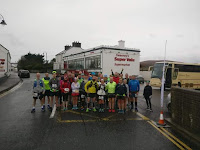 I strangely had been looking forward to this one. That is rare enough for me recently. I even had booked it up quite a while ago. It was also due to be 44K long which is a short ultra. 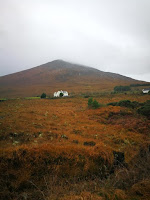 I heard from Finn who ran it the day before that they had changed the Greenway route and it was coming in at 43.5km. Now to qualify for an ultra it has to be 43.4km so I think we just made it. As it was, the declared distance at the start was 43.4km so it just about qualified. 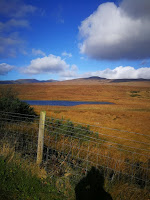 Being point to point the logistics were a little unusual. It was also limited to 50 people which I suspect was all that could fit in a bus. First part was to register at one of the downtown hotels in Westport.

An early start from Galway city brought me to Westport early enough to get registered and toileted in the hotel and have a chat to quite a few there that I knew. It was great to see Marie Chapman for the first time in ages and she was in great form. Also there was Humphery, back from his US travels and up from Kerry was Theresa Grimes (though I suspect she would rather be at home with the grandchild). Also there from the north was Jill and hubby and Peter had left at an un-godly hour to make the journey. Naturally the stalwarts Dave Brady and Ger Fahy were there and they would stay together all day and finish together. 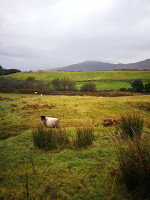 At around 8am we boarded the bus and took the 40 minute journey to Achill Sound. Stopping briefly at the hotel for a toilet break we climbed back on the bus for the few hundred meters across the bridge to the Island. We started pretty much immediately and were off. 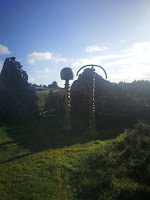 Quickly we were over the bridge and off the Island and within a couple of hundred meters we were on the Greenway. The first aid station was at Mulraney some 9 miles into the route and the journey to Mulrany can only be described as world class. We had the Mayo mountains on our right and wonderful vistas off to the left. The Greenway itself was tarmac or hard packed and we seemed to have it pretty much to ourselves. Now and again we met a few bicycles. I chatted a bit to Marie and Aidan Swords and settled quickly pretty much at the back. I really wasnt bothered about time today and wanted to enjoy it as much as I could. I certainly enjoyed this first section.

The Greenway was well off the road and you rarely saw it. 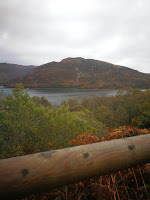 There was one particular section that wound its way around a lake on the left and through a forested section that was just wonderful.

Quick enough we came up to the first aid station in Mulraney. Everything was on the table that you would need and first aid was ever present. Cezary offered me a water bottle and I left quickly. 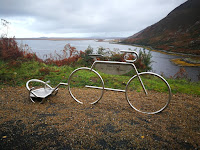 Out of Mulraney there was quite a significant climb for a mile or so and this brought us up high over the village and the views over the Atlantic were just great. There were a few of us that tooed and frooed at the back on this section and I was always within contact of someone. There were lots of style type gates and cattle grids on the route that gave you some focus to run to. Again the views were absolutely world class and I continued to enjoy it. 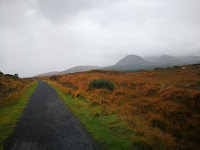 Eventually the wildness came to an end as we approached Newport. Now we actually had to enter the town and I didn't think the Greenway was that well signposted. I asked a couple of locals and they pointed me over the bridge in the main town. I crossed the bridge and started to head along the river. I heard a shout from behind and it was Humphrey and Theresa telling me I was going the wrong way. The actual right way was up the hill away from the river. I followed them up the hill and on the other side was the second and last aid station. I picked up some water and some jellies and headed off towards Westport. There was 12 K to go,  I lost Humphery and Theresa and was on my own on this bit and we were very close to the main road as the Greenway followed along it. 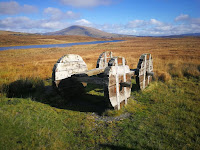 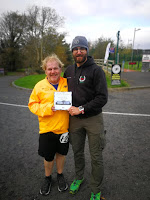 To amuse myself I walked for 0.05 of a mile, jogged for 0.05 of a mile and sprinted for the same. The miles flew in and I had actually picked up the pace overall. I even managed to keep this going through the long hill just before the end. I got to the top and could see the finish in the distance and jogged through. I was determined to get in before 6 hrs and managed 5:55 odd.

I got the lovely slate memento for finishing and walked the 1k back to the hotel. Paul Comerford was waiting and we walked back together. The last time I ran with Paul was in the Belfast to Dublin Ultra.

I didn't stay for the food in the bar and said my goodbyes and went straight back to Galway.

I loved this event.