This was part of the movies series of Phoenix Running and was based on the movie Top Gun. I suspect that the medal was the thing that got most people signed up as it was pretty cool. It had sold out very quickly and 104 started on this 6 hour challenge.

Todays run was on the 'B' route for Phoenix running that went towards Walton Bridge from The Weir Pub on a 3.35 mile out and back. It was basically 1.6 odd mile straight up the tow path turn around and come straight back. You passed a rowing club, a pub and a small but steep enough bridge on the route each way. There was a toilet block and ice cream van at the far end.

8 laps was a marathon and you only had to complete 1 lap to finish.

Now the weather had been pretty bad during the week before and it muddied up the soil based parts of the course and had left puddles on most of the rest. In fact the night before there had been some trees blown over but these were dealt with before we arrived. They were navigable with a few jumps and side steps and were awkward all day.

Finn O'Mara over visiting her daughter at a local university was also signed up and knowing her phobia or bridges I wasn't sure at all that she would handle the route. It turns out she was fine.

The weather on the day was absolutely stunning. I reckon it got quickly upto 24/25 degrees with some estimating it 27. It was hot.

It also being a themed event there were quite a few turned up in fancy dress. I recognized a few from Basingstoke that had turned up. It was very hot for fancy dress but amazingly the person first over in marathon distance was in a full fling jump suit.

The aid stations were as always stunning and wanted for nothing.


At 9:25 we were given a rousing (Top Gun Themed) race briefing by Rik Vercoe and by 9:30 we were off. i started at the back and took quite a while to find my place in the race. This led to a very slow first couple of miles.

On the out leg the wind was stiff enough in you back but as the heat rose this got tough and very warm. When you turned it was in the face and was cooling but stiff enough in your face. All in all it was a very very warm, humid and tough day. To add to this a lot of people went off like hares. Paul, and particularly Nick went off fast. I am normally well ahead of both but today I was way way behind.

To add to my woes, the front of my right lower leg got very sore and tight in the first 10K. Fearing injury I dialed it all back a bit and hoped it wasn't serious. This led to a very slow first 2 laps in over an hour (Way off 4 hour pace). After 10k the leg seamed to ease and I managed to get a pace going again and managed half marathon in just under 2 hrs.

The heat was having its toll and a lot of those who started fast faded and I caught most of them. More than half the field also stopped before marathon distance which meant that from a busy course early it became very quiet in the later stages.

The heat also got to me and I started to take on a lot of water. Everyone else was suffering badly as well. The guy who was way way way out in front bizarrely stopped after 7 laps not completing marathon and the winner was in after 3:43 which shows how difficult he conditions were.

I came through 6 laps in 3 hrs exactly and knew then that 4 hrs was gone and eased up a little and eased home in 4;08;50. This was good enough for 17th overall and 15th at marathon distance.

Finn had a strong run in 4:21 which was good enough for 2nd lady overall and 1st at marathon distance.

The medals were pretty cool and it was lovely to spend an hour after a shower in the leisure center at the pub for some dinner. Lovely day. 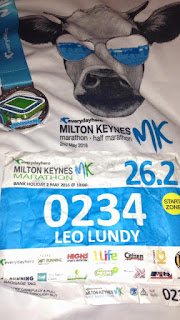