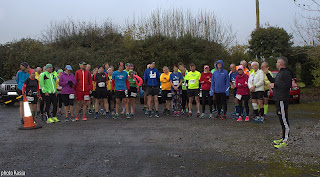 This was my second time doing this event. Last year it was the penultimate event before my 10 in 10 attempt and I was happy to get around in 4hrs 30. I wouldn't get close to that today.

During the week I had been diagnosed with Metatarsalgia which is the cause of the the pain that I have been feeling in the ball of my foot. I explains why I can't run during the week and am in constant pain when running.

The HQ was the rugby club outside Ballinasloe and we had use of the bar area, toilets and hot showers afterwards.

This year there was only one start and the course would be run in reverse. There also was a half marathon and 10K scheduled later in the morning. Aidan Sheridan and family were the hosts for today.

I have to say that running in reverse was much better and much safer than last year.

We headed off at 8:30 on the dot with around 50 in the race. It quickly settled down. We turned left towards Ballinasloe and climbed for around 800m before a 1K gentle downhill to the motorway roundabout. Skirting past the roundabout we traversed a footbridge over the motorway before heading down a very well heeled road parallel to the motorway. About 1K later we climbed steeply on a cross road over the motorway which immediately brought us onto the long straight bog road. 1.6 miles of nothing later we turned at a cone and still on the bog road headed for home over some fairly rural Galway back roads.  There was some long drags but nothing too severe. Turning right onto the main road again we faced the traffic for 1 mile until it brought us back to the rugby club. The loop was 6.5 miles.

I was through 1 lap in 1hr 8 mins and headed out for lap 2. Apart from one shower it was dry and cold and pretty good running conditions. I dreaded the long big road section everytime we came to it. 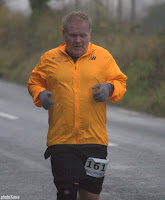 All in all I ran well but my foot was agony.

In to the clubhouse afterwards there was a great spread of sandwiches, cake and tea/coffee. Great value for €20.

Today was officially a road marathon and my 96th one of those and my 99th ROI marathon.