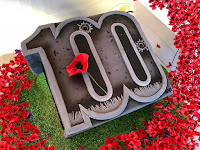 This was one the Phoenix running flag ship events in Walton upon Thames. It was by far the biggest event that Phoenix had put on and nearly 400 of us took to the marathon course over the 10.5km loop in Walton. 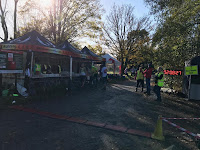 To make things a little special this was also the 100th anniversary of armistice day. As is normal now on these events the medal is kept secret and only unveiled during the race.

We were lucky with the weather and though the course was puddly underfoot the bad weather stayed away. Never the less it made for a very muddy affair with lots of puddle jumping. 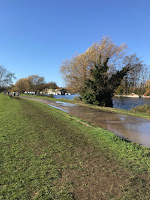 Also there was Maighread and Brenda and also travelling over was Philip and Francis though we all ran our own race there was lots of passing and we all kept in touch.

I found this race tough going and didn't really enjoy it. To make things worse about 1/4 way through the second lap I lost my footing at a very slippy bit and did a full slow motion fall right into a puddle. I ended up prone right in it and soaked and muddy right up to and including my face. I wasn't the only one who fell as I saw Mel having a muddy time as well. 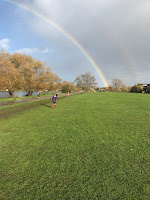 I was lucky though as I managed as I was falling to roll and did not land heavily on my knee. That would have been a disaster. Being only a marathon there were lots of traffic all day with some of the fasties finishing just over 3 hours.

My times at the moment are not good and a 2:45 first half was followed with an even slower second half.  I really did not enjoy this run.

I did however have the pleasure of running the last 5K with Julie Twinny and we had a good chat. It clicked over 6 hrs before we finished.

The medal was as always spectacular and we even got a second for free as it was Phoenix's 100th event and Rik had crafted a special medal for that. In addition Rik had 2 x florescent phoenix wings for me as I had finished a 52 in 51 and 100 in 100 at his events. 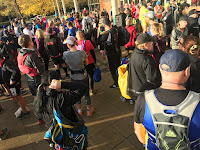 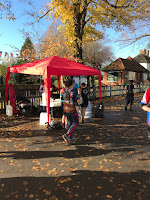 As soon as I had finished I left Maighread to the train station. She was attempting to get to Gatwick. Brenda was there waiting when I returned and we said our goodbyes and left.

The journey continued when flying back to Ireland the next week, security took the medal off me as a dangerous weapon and after some negotiation it ended up flying in the cockpit with the captain and given back to me when we landed in Dublin.

Stats for the day..