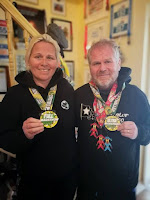 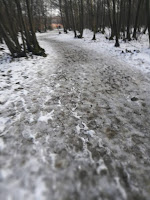 The thaw was due however on the Sunday and the Mega Challenge was still on. This was in the Kingswood SVN course which I have run a few times. I picked up Brenda on the way early doors and we were at the venue for 7:15 well in time to check in.

The start area was a sheet of ice and as we started on the button of 8am it was a "5 4 3 2 1 Walk". I took it super easy on the first lap as the whole course was pretty much ice. 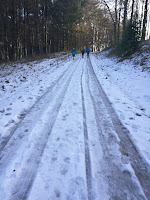 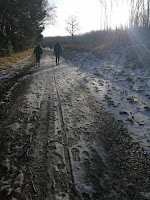 The first 400m of this course is over a trip ridden forest/damp icy muddy downhill section before turning left on decent fire roads. On the first lap it was completely frozen. For the next mile you sweep downhill to  the lowest part of the course.  It bottoms out to a long steep up hill section that is for me only walkable. Cresting a flat 800m brings us to another short steep downhill before a similar steep uphill. This eventually leads to a long long drag uphill on an open trail. Turning right back into the trees there is a rather muddy bit (slightly up hill) before turning left on another long drag up and down dale which leads onto the final climb back to the aid station. I managed the first lap in 57 minutes and tried then on to keep things under the hour. This was a 4.28 mile loop.

Through the morning the thaw came in and the ice turned to slush and eventually mud. There was over 3000ft of climb over the event and it was 6 laps for a marathon and 7 and a bit for 50K. 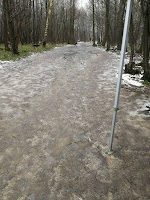 Tracking behind me all day was Paul Commons and Richard Glister who were preparing for next weeks 100mile effort and Nick Nicholson doing what Nick does. 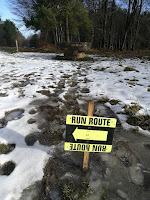 Half marathon was in 2:50 and I kept a steady enough pace for the second half coming through 6 laps in 5:45  . At this stage an icy rain had been soaking us for hours. Finishing marathon distances I turned and went out again. A slightly slower last lap had me through 7 laps in 6:50 odd and an out and back had me finish 50K in around 7 hours. You would go some to get a more difficult 50K.

This was good enough for 8th overall. Brenda doing her #309'th marathon was in just before me.