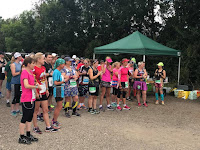 I deliberately had a day off between the Hangman and the Cyclopark visit. B2B's really do me in at the moment and the extra day would be invaluable. And so it proved.

This was part of the SVn summer series Ten in Ten (TiT). It was amazing to see how many of the people who did the winter series were also here. It was 10 challenges with a sneaky 1 mile 27.2 mile ultra possible. If only I had that option last winter. But hey ho!

It was on a slightly modified "lightning bolt" course so I was very familiar with it. I arrived early checked in and paid the £3 parking. 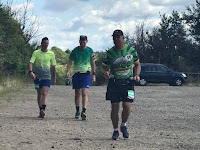 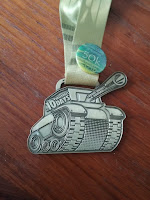 About 100 headed off on the challenge. It was warm, very warm rising to high 20's and humid which made the going tough. All the TiT's were running well. The first casualty was Barry Gerhold who in his 4th day, called it a day after 10K.

Starting from the carpark at the Cyclopark we ran down towards the entrance. Immediately we hugged the hedge on the right hand side and climbed steadily along the track for a mile or so. It was undulating but headed predominately up. The field soon spread out on the narrow track. A quick up and down to the Rabbit bridge we crossed it and soon arrived at the road at the other side. About 50m on the road section we returned to the bridge. It was a right turn here onto the main cycleway and a 400m out and back had us heading on the wide cycle path back towards the cycopath. This last mile was predominately downhill. 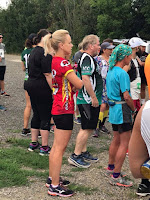 I ran a little with Paul Commons and Rob McGregor (Both TiTs) and started to churn out the laps. roughly 40-50 minutes was my lap time which involved a lot of walking on the hills. A 2:40 half marathon was followed by a pedestrian 5:45 marathon. This gave me plenty of time to go out on an ultra lap and then an extra mile for 50K.  Though most did 27.2 miles only a few went out for the 50K.

This was Ultra no 80 and was a hot and humid one.