This was a big red letter day for me as it is my 250th Marathon/Ultra. I had prearranged with Rik the race director from Phoenix running to get race number 250 so was all set. 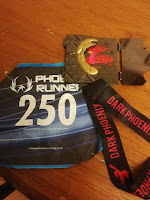 This run was an evening running starting at 4pm and as far as you like in 6hrs. Given my form and the predicted weather I knew a marathon was all that was happening. In fact there were only 2 people went ultra this evening.

I arrived in blistering conditions at the registration at around 3pm. Agatha whom I met on a recent trip to Texas was already there, stopping off to run as part of a trip around Europe. We checked in and relaxed outside the leisure center in the shade.

It would start off at 30 degrees with little restbite all evening. There were a small number were doing 2 on the same day and a smaller number would be back for a 3rd the next morning.

At the race brief Rik mentioned my 250th. Almost immediately from behind Jack Healy appeared to tell me it was actually his 200th. Now on my 50th on a rainy day in Craughwell it was actually Jack's 100th so we were no strangers to celebrating together. Jack had travelled with Paul Hogan and Michelle Burke from Ireland and it was great to see them. It was their second for the day and they would go onto see Ireland in the Hockey world cup final the next day.

We walked to the start. I had a coolbox with coke, Irn Bru and frozen water and left it at the start. At 4pm we were off. It was roasting. I started Ok and did a pretty OK first half managing each 5K loop in approx 35 to 40 minutes. This brought up half marathon in 2hrs 30. Then the wheels feel off as I succumbed to the heat.

First Agatha passed me looking strong and would go onto do her second fastest marathon at 5:23 and eventually the Irish caught me just at the end of lap 6.  Surprisingly despite my tardiness I was still mid pack.

At half past 9 as I went out for my last lap, I donned a head torch and struggled on. I even tried hard to beat 6hrs but failed coming in at 6:01 having quite a turn of foot over the last mile.

I was delighted to finish as it had been a tough one. A lot of people who normally go ultra all stopped at marathon today.

Afterwards in the pub I med two German runners, one of whom actually had ran with me in the winter Coburg marathon a few years earlier. That was bizzare.

Anyway 250 done and still running though my performances leave a lot to be desired.