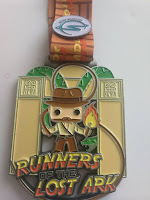 Back in the UK I decided to do this one as it was relatively close to Basingstoke. It was still roasting and humid as a warm spell engulfed the UK. It was showing 26 degrees and very humid.

This was the same day that the 145 mile Birmingham to London canal race was on and I felt all day for those that were doing this in those conditions.

We headed off West along the Thames and I found the 1.65 miles out and 1.65 mile back route quite interesting. You passed a couple of working and busy locks, a Hotel, passed under the M25 and had a very nice covered wood section before turning at a busy pub section. The route was fairly busy with dog walkers and a lot of cyclists. There was also lots of bridges to keep you focused.

It was 8 laps for a marathon and 9 for an Ultra.

I ran most of the day by myself and I found there was enough interesting parts to break the lap into lots of small marker points. I toddled along on my own with a pretty reasonable 2:20 first half marathon before slowing badly in the heat. 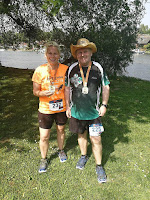 Still I kept going passing lots of people I knew. I noticed Brenda was running a lot with one of the older guys who ran half naked. At one spot I came across them with him on the ground. He had the heaviest of falls.

Also at the hotel there was a very posh wedding and we no doubt photo bombed a lot of their photos.

As the day wore on and I was out on the Ultra lap it became very quiet with most finished already. Brenda decided she wanted to do Ultra and as it was a 7 hour event and we had started early there was plenty of time.

I eventually came in for 6:20 with Brenda not far behind.

I loved the medal and there was a small goodie bag. I have to say Saturn running did a great job and after feedback they will have a 50K option in all events going forward.

I will have no issue doing these events again.