This was an event that I entered quite a while ago and it was organised by Brenda G Francis and Boston Scientific. It was a charity event with all proceeds going to Enable Ireland. There was a 10K, Half marathon and Marathon around a 1 mile loop within the grounds of Boston Scientific in Ballybrit industrial estate in Galway. Yes it was running around a carpark.

It was within a mile of the apartment in Galway which was convenient and the rest were off on a weekend in Prague so I was on my own. I came down the night before with the dog, and unfortunately decided to de-ice the freezer and stuck a knife straight through a pipe. Dead freezer, great!!!!.

It was an early start on the Sunday so I got there at 7:30am. I had a quick presentation with Theresa Grimes with her 100 in 100 GMC medal and I checked in. All races were to go off at the same time. As well as Theresa, Don, Dee and Anne were up from Wicklow/Dublin and a few from the west of Ireland were there including Ger Donohoe and a welcome return from Valerie Galvin, and it was good to see Tony Nevin for the first time since the Dublin marathon in 2016. It was going to be a small event and I hoped that there were would be 15 finishers. Gerry Ford arrived late becasue he ran out of petrol in Gort. He didnt have time  to do the whole event.


We were walked to start which was .22 around the lap and we were off at 8am. The half marathon starting .11 ahead of us. We came through the start line and started 26 laps of effectively what was the car park. 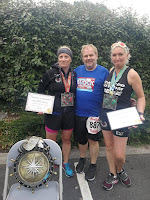 A right turn with a slight downhill brought us to where Shielagh was stationed all day, further down an incline and we came to where John (Peter Mizi's friend) was stationed. A quick smaller car park loop was traversed before we did a 350 m out and back along the back of the car park. Back towards the main plant and a climb back to front of the building brought us to the front of the building and a last 350m straight to complete the lap. Redtag timing were there and the start/finish was under a gantry. There was an aid station with plenty of water and sweets available every lap.

Interestingly for me Boston Scientific have just bought the old Digital plant which we ran past every loop. The last time I was here was 28 years ago.

I started off Ok at about 9:30 minute miles but that dropped off quickly after 4 or 5 laps. i am struggling to have any pace or decent stride after 10K these days. 10K was in 1hr 6 which had me through half way in just over 2hrs 30. This was going to be a long day. After the half marathon finished it got very sparse on the lap. Cezary (who got a PB) and Don were lapping with ease and both would go on to great times despite Don nearly breaking down fairly close to the finish. Mirko was in 3rd and the only other one to break 4 hrs. 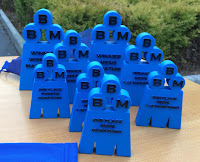 I spent some time running and chatting to Brenda and was very pleased to present here with her 12 in 12 GMC medal at the end of the event.

I tottered on following Theresa lap after lap after lap. It was fairly warm and very humid. I made a bit of an effort for the last 2 laps and came in with a very disappointing 5hrs 46. The route though actually measured came in at 1km long according to my Garmin probably because of the racing line.

At the end there was coffee and tea and sandwiches with cakes. Nice!!

I headed off to watch the golf and left them to their colour run.