Never have I ran an event that was so shrouded in secrecy.

I got an email in May 2017 from Phoenix Running: 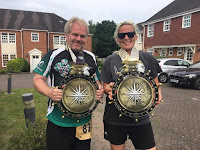 "This is a confidential marathon invite from Phoenix Running to attend a very special event to be held on our Thames towpath marathon route at 9.00am on Saturday June 9th 2018 – The PHOENIX Explorer Marathon.

At this stage we can’t really say much more and we appreciate we’re asking you to commit and trust us on this one!"

I was intrigued and entered as this is my birthday weekend and I love a special event. There was not much more information that came out for this event for the rest of the year and eventually with the same obscure information was opened to the public circa Jan 2018. It sold out in 14 minutes. Amazing really.

Rik from Phoenix running began to tease everyone about what was coming and eventually it came out that the medal would be special and being manufactured by Running Imp in China and would the world record for a medal that would be awarded to the finishers. Rumours were of 8lbs and the size of a large dinner plate. Rumours abounded about the factory refusing to make any more and the real  cost of the medal, which had to be more than the event entry.

Eventually the medal was unveiled at the London Marathon expo and it did not disappoint. IT WAS HUGE!!! 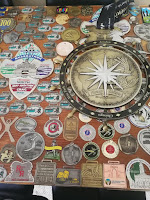 To the race itself it was to be a marathon with no option for shorter or longer and it was to be held on the westerly course at Walton. This was the 10K odd route down towards Hampton Court and back (no bridge). I like this route and its been a while since I have run it. It was the first time I have run it in the summer without puddles and mud. I picked up Brenda on the way (she got a latish entry from another competitor). Today was all about the bling.

It was a very warm day. It was 4 laps for a marathon and there were around 130 runners there for the event. It was great in particular to see Fiona McNeilis and Apryl Hammet there after their epic 145 mile journey the following week.

I started faster than normal and was through the first lap in just over 1hr which is quite a bit faster than normal. In fact both the girls were through the half way before me. I hit the half way mark in about 2:20 and then decided to take it easy. I caught up with Fiona who was with Paul Commons and walked pretty much the 3rd lap. Paul and I pushed on and ran together up until the last 5K.

Paul Commons is a gas man and we stopped with 5K to go for lollys and had a good old chat. Paul pushed on for the last 5K and I was slow. It was still hot and when we eventually finished we were rewarded with a truly epic piece of bling. This no doubt will be the biggest medal I will ever receive and at the time of writing is a world record.

This is the only medal that I have that comes with its own stand.

I enjoyed the day.