This was a White Star Running event, and the other times that I have run these events I have really enjoyed them (Giants Head, Larmer Tree x 2). We were back in Dorset again just beyond Blandford Forum, hosted in East Farm.

I traveled with Brenda and it was great to see her back running again. A 1hr 45 min drive got us to the venue and the first thing that I noticed was that it seemed to be smaller than the previous events. There was camping (less than I expected) and there was the usual WSR tented village. But unlike Larmer Tree and Giants Head there was no buildings. There might have been some for later in the evening but we were in the middle of a field.

It was a Roman themed event and there was lots of centurions and togas around. We picked up our numbers and got ready. At the start, the weather was fine but it was due to close in later and it didn't
look that promising. This was a full running weekend and as well as the marathon on the Saturday, there was a "chase" race on in the evening and a half marathon on the Sunday. Because the weather on Friday was not great and the weather on Sat evening was pants I think a lot of people abandoned camping plans.

We walked the 200m up the field for the mass start and we were started by a Centurion and followed another who was riding a horse and led us out for the first mile. We came through the finish area and went through the farm. Almost immediately we hit a hill and was reduced to walking. I have to say my knee was very grumpy and I had to adjust my knee braces and fell off the pace immediately.

A couple of miles in we crossed a really busy road and hit into the deep Dorset country side. Over a style we came to the first aid station. Only Water??? This was not like WSR as I was expecting a feast. We went on and I was struggling all the way and was running pretty much on my own. I walked all the hills.

Around 6 miles we came across the Somerset and Dorset abandoned railway and stayed on this for quite some time. It had also been quite a while since we had an aid station. After 8.3 miles we came off the railway line and back into the rural countryside. Hills were a plenty and we skirted many barley fields that were ready for harvest. Eventually (way too long a gap) we came across another aid station (again only water and some gels). The rain had started at this stage and it would be with us for the rest of the day. On leaving the aid station we hit some country lanes that were well muddied up and walking was all that was possible. There were lots of slips and falls. These lanes seemed to go on forever and was broken now and again by some nice forest sections. Around 13 miles Paul Allen came past (lapping me) saying that he thought that all the leaders had been sent the wrong way and the race could be 3 miles long. I came through half way in 3hrs 15 mins.  I knew that the course was long and I knew that it was 2 laps but when the love station came up at mile 14 I was very confused. At least at this aid station there was some food and coke and many lovely young girls in Toga's.

The mud continued and after about 1 more mile there seemed to be a split, lap 1 to the right, lap 2 to the left. I turned right and after another big hill (past the best looking craic at a dirt buggy track) we were back on the railway line again. One guy with me should have turned left and after 23 miles was some 3 miles off track. He went back. The next 7 or 8 miles was retracing our steps over the railway, barley fields and hills and mud. It was very very slow going and the mud had got worse and was nearly unpassable at times. Eventually I slipped and slided my way to a very damp love station and filled up again.

This time at the split point I went left and was on familiar ground as this seemed to be retracing our steps back to East farm. There was one turn that was very ambiguous but thankfully I picked the right way which brought me to more hills and back to the very first aid station. I had 26 miles on my watch at this stage, but the lady at the aid station told me I still had 2.5 miles to go. We crossed back over the busy road and back into the farm. A little detour off the original route brought us around the back of the farm and up a near vertical climb  high above the farm which meant the last half mile was a sweeping downhill into the finish. I got there, wet, tired and hungry and in 7hrs 28 mins and it ended up 28.5 miles and over 2500ft of climb in what has to be said was horrendous conditions. It was also my personal worst marathon time but I still beat the sweeper by an hour. 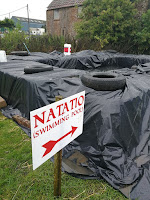 We got a small goodie bag and a very nice medal. This surprised me as on WSR events in the past you got either a free Tshirt (which were for sale separately) or some free food (which was for sale separately). All in all I didn't feel this event was as good as previous WSR events (or even close) with facilities much lacking and the course not being that good at all.

It turned out there were significant issues with WSR leading up to the event which explained all of this and the event was nearly cancelled. What we got was better than it being cancelled. Would I do the Dorset Invader again. NO!

Its debatable that this was an ultra or not. I chose to record it as a trail marathon.