Achill Back to Back

I had not been able to run all week due to work and my sore knee so was going to rock up to this event event and take it easy. I in no way had recovered from the Spitfire Scramble and was on tired everything.

Rather than go Achill on Friday night I decided to split the journey and stayed over in Galway on Friday. The weather on Friday was terrible and it was a tough enough drive to Galway in the rain. It rained all night and even though I had the intention of going to the parade in Eyre Sq on Fri night, as it was still lashing rain I decided on a early night.

Luckily Karl Randall had been onto me which forced me to check the start area which was different that I was assuming.

I was up at 5am reckoning that I could make the early start and set off for Achill. A quiet journey got me there for 7:30 which was in plenty of time to checkin and get ready. It was a modest field with many doing 4 days in a row with some even trying 4 ultras. There was an early start for marathon and Ultra and the half and main start was at 9am.

By 8am we were off and started on a new portion of the course that was straight downhill before sweeping
left skirting Dooega village and climbing steadily for about 1 mile until we joined the course route that I was familiar with. By the time I reached the up hill I realised that I had forgot sun cream, gels , but more importantly I had forgotten my knee brace. Immediately I pulled back and decided not to risk anything and walk all the hills which was about half of the course. The sun came up and it was warm. We were also running the course the other way around so ended up hiking up the Cork screw hill. The course was even more spectacular than I remembered.

I was slow and just managed to keep ahead of Lucy Foley (who went on to be first lady in the b2b). Walking the hills and taking plenty of water was the order of the day. We were still on the old route right upto mile 11 and my knee was killing me. Lucy took me at this point and disappeared. Cruelly, the change in course had meant quite a few extra hills and generated >1700ft of climb over marathon distance. I came through half way in 2:28 and managed to get my knee brace on. Initially it didn't seem to help but eventually I didn't notice my knee so it seemed to work. 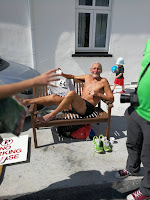 En-route, I of course came past the lovely Hill family from new Jersey and got the obligatory selfie with Kevin. What an athlete!!!! 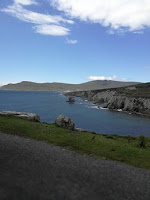 It was really really warm on the second half and I was generally on my own and had no incentive to speed up and therefore slowed down. I huffed and puffed my round to a 5:47 full marathon and was delighted to stop. Some soup in the pub and I hung around until virtually everyone was in and it was off to the hotel.  Brenda Francis was celebrating her 75th and a very sweet speech and presentation was given by her friend Jenny.

There was an amazing Mayo themed T-Shirt and a very unique original Donna McLoughling hand painted coaster as the memento for the day. Jill McCann and Neil McSorley seemed to have a great day be it on a quad and the ever present Derek came in with Dave
later in the heat. Dave then flaked out on the bench for half an hour topping up his tan. It was a lovely atmosphere. I have no idea what happened in the half marathon and I felt for the 10 or so who went out for a 3rd lap for a 40 mile ultra.

A big feed and a few pints and a night with the Elvis impersonator had me off to bed early enough.

Up early, I was back at the start line just after 7. Now the midges are out
at 7 in Achill, and anyone who was there between 7 and 8 can attest to the swarm of midges that engulfed Lavells hotel and ate the livin bejaysus out of everyone. The only place to hide was indoors. Today was a smaller affair with around 20 in the marathon. Fortunately it is listed on the UK marathon club website so it counted anyways. It was due to be hot again today and I had the head burnt off me the day before, but of course it was due to be the same today and no sun cream again.

Karl Randall turned up, back running after his op and after I told him I was planning on a 6hr run he said he would stay with me as he didn't really want to run on his own just yet. Thankfully Donna got us going at 8am and we ran away from the midges even though as I write this 2 days later I am still scratching like mad. Karl's wife Trish and son were on the course cheering us on.

Karl and I settled into a slow and steady walk the hills strategy. Collette settled in just behind us and we
towed her along for most of the day. Again the course was spectacular and I am glad that Karl picked this event rather than some others around. The same as yesterday it was warm. There were plenty of water stops on the course with sweets , water, coke and orange juice. There was also plenty of cars roaming around with water. We were well looked after. 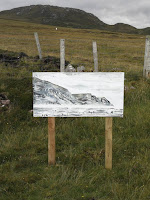 Peter Ferris and Geraldine Crawley had a great run today and there were few new comers and the pace overall was pedestrian to say the least, but it was the last day of a long week, it was hot and it was hilly. But what a triumph of an event.

Today we got the most gorgeous hand made broochy thing from Donna with the logo of the race embedded. In fact the course was littered with art masterpieces....

I just love this event and it is still my favorite course.