I entered this event mainly as Sean and Brenda were going and they would be looking after me in terms of camping and driving. Unfortunately that didn't work out due to illness in the family so I attended alone. I decided not to camp and my daughter found me an unbelievable hotel fairly close to the venue. So I was going to base myself out of my car and use the facilities the organisers were setting up for solo runners. I was also nervous enough about driving after, as it was a 2.5 hr drive. 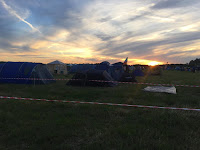 This was a relay event for 2-8 person teams and also a solo event. So very similar to Endure 24 which is the only thing that I can compare this with. That was an extremely high bar.

To start off with this was a smaller event. With 700 runners total it 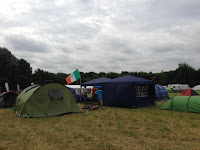 was less than 25% the size of Endure so expectations were not that high. Camping was free and most everyone was camping. Onsite there were plenty of portaloos and a shuttle to offsite showering facilities. There was also a solo camping area that bordered the finish and most solo's were setup here. Unfortunately, as I didn't have a tent I was not allowed in this area. In retrospect I should have parked at the top of the field at the 4 mile mark, along the route,  and would have had access to my car there a few feet from the course.  As it was, it was quite a walk off the course when I needed it (and I did).

Also onsite was a burger van with most people looking after themselves with BBQ's etc. Apparently this was less food facilities than last year, but it was a different start finish location. I arrived at around 9:30 am and quickly registered (nice T-Shirts).  The timing chip was ankle based and fine. Timing in general was great and I heard no complaints all day, and the main marquee had team positions permanently on display and individual look up if you wanted. It was very good. Also onsite was a physio tent you could book massages at and very visible medical (that was all good). Apparently security was also upped and I heard of no incidents. 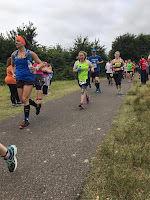 I was on 2 weeks holiday from work, and had just spent 1 week in Crete with virtually no running at all. Every time I tried my knee was playing up so I had no idea what was going to happen. I advil'ed it, I volderol'ed it, I Bio-freezed it and had 2 knee braces on. It was fine upto 50 miles but did hurt the last few hours.

At 12 noon we were off. Being a smaller event it quickly thinned out. The course itself was a figure of 8, 5.7 mile loop that returned to the main campsite at 4 miles. It was relatively straight forward with the first 2 miles a gentle climb on tarmac and decent trails before sweeping into a wood section. There were few trip hazards but I heard of no-one getting into difficulty. Mile 3 was mostly over an open heathland (that I managed to get lost on in the middle of the night). Mile 4 was interesting and seemed short as we skirted a wood and a lake before returning to the campsite. Mile 5 seemed long as we trecked through another park on good trails before the only significant climb on the course (Maybe 600m) that rose to reveal fantastic views over London and what a sunset. The last .7 mile was a downhill celebration back to the finish area. There was no doubt it was a much easier course than Endure. 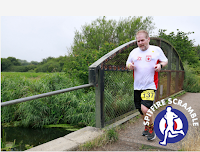 One of my main problems (nothing to do with the organisation) was that I normally know quite a few people at events and sometimes the whole field. But at this one the only person I knew was Anna Hatton. We met briefly at the start (30 secs) as she was running late, and again at her 100K mark (again 30 secs) and I felt very alone the rest of the race. Its amazing that as long as you know people on the course they seem to be with you all the time. I didn't like it. Anna went on to run >90 miles and took second lady.

Lap 1 was 1 hr 3 mins, which was way too fast and I slowed down after that. I was steady enough, though slow, through the first 8 hours and was well down on my PB but still well within 100 mile pace. It was quite warm and very very humid and I was taking on a lot of water. Later I became the main course for every mosquito in the South Of England and despite bangles and bracelets and jungle/Jungle I got eaten alive. The organisers supplied a couple of very large 1000ltr boxes of water at the start area that I used liberally. There was also a water only aid station at 2.5 miles that I stopped at every time. The marshals were very friendly and gave much encouragement. I was struggling but doing Ok right up to dark. I had to goto the car at this stage to change, as my back had chaffed bad and was bleeding (second time with the new Cru gear!). Unfortunately on the way back to the course I noticed I left my head torch in the car and had to go back and get it. From here on in, I pretty much went off food and couldn't even look at it.  I have to say sunset over London was absolutely spectacular and seemed to last forever. 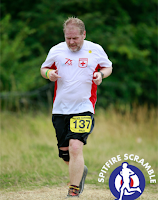 Even though pacing was not allowed there seemed to be a lax attitude to it with lots of bikes on the course with runners and one guy in the solo event having 2 pacers alternating with him quite openly. I didn't like that. 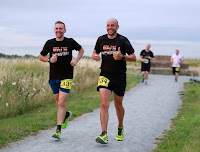 Now my biggest gripe for this race, which is fixable, was the position of the solo aid table. 1) It was uncovered and lucky it didnt rain. 2) It was right in the main change over point for relay runners. I literally had to barge my way in and out every time that I used it (every lap). Relay runners were also using it, and on several occasions I noticed people just helping themselves to my stuff. I have given this feedback to the organisers. It can be fixed by moving it with a gazebo to the other side of the track or earlier or later on the start/finish straight or if solo's be allowed to base their cars out of the solo area, or solo cars base themselves at the top of the field at the 4 mile point.

Back to the race: I also slowed badly at this point and was walking way too much and losing time. I think I decided around 45 miles that 100 miles was not going to happen. I therefore reset my sights on 75 miles or the very least 100K. After 50 miles I went off liquids as well which I new was not good and there were several occasions that I felt tottery and an increased number of people were asking me if I was OK. I therefore decided to stop running and walk for a while to see if I could shake it off. When this happens in these events its good night Irene and so it was. I came through lap 10 and was hurting bad and had long decided that lap 11 and 100K (63 miles) was all that I was going to do. I met Anna at this stage who was in great form and thought she was in 2nd place. I encouraged her to go and and off she went.

One consideration I had was the 2.5hr drive home and given I couldn't run I knew I had to stop. My Garmin had long given up and I actually have no idea of how long I took (results not published yet) but I know it was just dawn and there was still a significant amount of time on the clock.

As I came round to 11 laps and 63 miles I finished. I went into the main marquee and sat for while. I took off my chip and handed it in. Unfortunately the medals hadn't been delivered onsite so I had to go home empty handed. It is promised in the post so lets see. That was very disappointing. (Edit: It arrived within a week)

I left site immediately and given it was very early there was virtually no traffic. I managed to stay awake OK and was home showered and in bed by 7am.

Stats for today   (Only first 58 miles on Garmin)