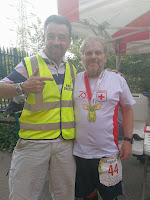 This was my 100th in 100 weeks and I am glad to get it out of the way. This is something that I will never do again and I am just glad it is done.

Mogwai was the second of a two day event run by Phoenix Running. Both days were Gremlins themed with day 1 Gizmo and day 2 the nasty ones. It was in a new venue at Fulbrook school near Byfleet and the route followed the Basingstoke Canal. It was multiple laps of 1.75 miles out and 1.75 miles back.

The school itself had great facilities with a hall for registration and a full leisure center for toilets and showers afterwards. The normal picnic aid station was passed every 3.6 miles.

houses and the canal. It was single file. Turning left over small bridge we crossed the canal and turned left along the tow path. It was tarmac and flat, After about 800m we passed a lock and through a car park, through a kissing gate and onto the towpath again. More tarmac for another 600m and a small hill at another lock and we continued on the towpath. There were many house boats and it was pretty. Soon the towpath gave way to a small slatted bridge at a wide turn in the canal as it headed off towards Greywell and eventually Basingstoke. We exited the bridge went underneath it and under a low bridge back onto the tow path towards Byfleet. This was  not on tarmac and 800m brought us to the turn point after a very nasty little climb at the end. There were some lovely houses on the far bank. Turning we retraced our steps back to the start. The only criticism I heard of the course was that it was a little narrow in places. But I liked it.

In particular for a lapped course it wasnt boring, it could be spilt into many sections and it was under shade for the most part. Today it was quite warm and that was nice. 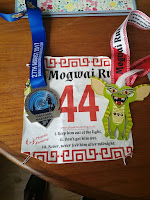 Starting my first few laps were at approx 35-40 minutes. It was quiet and I followed Nuala Smyth most of the day and Jo pleasand on my last lap.. I was slow at 2:25 for half marathon and approx 3 for the second half. This did however give me enough time to go out for an extra lap for Ultra no 51. There was more heroics from Nick Nicholson who went 2 extra laps. Only 4 of us went Ultra today including Apryl Hammit who is chasing the grey mega marathon top.