This was country no 12 and a big city marathon in the south western town of Wroclaw in Poland. I initially entered this race as it coincided with the European Masters Championships and I fancied a go. However after a complaint by the the British masters team less that 36 hrs before I was due to fly I was pulled from the event.  In the end it was a misunderstanding and I got an apology but it was too late to rectify and I had to be content to run in the main field.

It was the 2nd biggest marathon in Poland and had around 7000 competitors the vast majority being Polish. 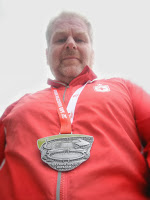 I arrived on a direct flight from Dublin on the Friday night and a quick cheap taxi (~€12) got me to a very nice hotel in the main square in Wroclaw. The hotel was great value at €65 a night. The the polava started. Key no 1 was given to me for room 236. Up the lift I went and the key didn't work. Down I went and the Key was re-programmed and up I went again and the key didn't work. Down I went again. After much apologies a new room was sourced and key re-programmed. Up I went this time to room 315. Hey presto the key worked but when I entered I was met with the sight of a guy sitting on the loo. I apologies and down I went again. More apologies and the original room was re-sourced and key programmed. This time it worked and I settled in. What a polava.

Anyway eventually the room was Ok and I went for a quick gander around the town centre and settled in for the evening knackered.

Breakfast (I have to say expensive) was had the next morning and I got my google maps out to find registration. It was 4K away so I decided to walk. It turns out all marathoners have free travel on the buses and trams in Wroclaw for  the weekend (including to and from the airport). Bus 106 from the airport and trams 9 and 17 from the main shopping center or Tram 9 from the main train station.

Off I wondered and it was a beautiful day rising to 25 degrees at times and I was down to t-shirt and should have had shorts on. I got lost 3 different times and ended up doing 10K before I found registration. Registration was simple and there was a small exhibition and I was set. 5K back home had me back in the main square by lunchtime. I spent the afternoon seeking out street art including numerous gnomes and working out tram spots for getting to and from the race the next day. The tram stop was about 15 mins from the hotel.

Wroclaw was typical of the European cities that had been devastated during the war and rebuilt. Old style but pretty modern. It reminded me a lot of Berlin.

Up early marathon day and checked out and ate breakfast on the hoof. I got to the tram stop at 7:15am and 2 trams got cancelled in front of our eyes. Eventually when a tram arrived not everyone at the stop was able to get on and we were like sardines. It was about a 20 minute tram to the start line and it left us off 100m from the start. About a 1 km walk got us to the baggage drop which was very efficient and we had some time to use the numerous portaloos as we wandered back to the start. Since I had been kicked out of the masters race I also lost my slot in the starting areas and had to start at the back with the walkers. We came across the line about 7 mins past 9 and for the first few miles was very restricted in pace.

I wasnt feeling that great and the first few miles were just over 10 minute miles. There was live timing every 5K and on completely closed roads. It really was a full service event and I plodded along. I came through 10K in just over an hour and felt OK. Actually my pace for the first 20 miles was very steady between 9:45 and 10:15 every mile. It was as flat as a pancake and when in the city tram tracks were everywhere and I witnessed a few falls. The route wandered through the streets and eventually onto the outer ring road before coming back to town. I came through half way in 2:09 which was much better than previous outings and I had a sub 5 on my mind.

I ran pretty good for the 3rd 10K and came through 20 miles in 3hrs 20 or 10 min mile average. I was comfortably under 5hr pace at this stage and pulled back a bit. Immediately I started to struggle and walked for bits with everyone around me. The pace group 4:30 passed me at 22 miles and I held on for a 4:35 with a great finish in the Olympic stadium. I was very pleased with this as I felt I had the same effort as much slower runs.

The finish area was very efficient and we picked up our medal and bags before heading back to the tram. half an hour later I was back in the hotel and so started the slow journey back home. I have to say the lounge in Wroclaw was amazing with Spinach soup with bread and lard on the menu. I eventually after some Ryanair delays home by 2am which included a 45 min wait for a taxi at Dublin airport.

I enjoyed the experience.