This was a busy weekend. The weather forecast was good (if not very warm) and it was new course for this quite unique event. Greg and Janet are two regulars on the SVN running scene and ever present and they were getting married in the area on the Sunday. They were there dressed in wedding dress and tails complete with many family members and even bridesmaids. Pretty cool really.

The course itself was a last minute one in Ashdown Forest as the head ranger scuppered the original route. It was due to be hilly. No one really new how bad. To compensate for the elevation it was an 8hr time limit. 79 people started the event and you could run as far as you liked in the 8hr time period. It was a 1.9m loop that frequently came past the ever awesome aid station.

The event started on time at 9am and the first 50 m was gently down hill over grass before a left turn and gentle climb back to a car park for a couple of hundred meters. A sharp right brought us through a short forested section that had many tree roots exposed and a tree that had to be hurdled every lap. I went over on my ankle a couple of times in this section but survived. Exiting the forest you climbed a gentle hill back towards the start but continued straight. The views from here were spectacular. The course now started to go downhill and after 200m turned sharp left and started a very steep downhill section. This was very rutted and tough to keep a pace on. After carefully getting through this section the trail opened out briefly and you came to the lowest part of the course crossing a bridge before starting a very steep and long climb. For me this was only runnable in short bursts at the start and at the end. The rest was a steady hike. At the top again we had unbelievable views over Ashdown forest and I suspect most of Sussex. Cresting we turned right and had the only flat bit of the trail for a couple of hundred meters before again climbing steeply for a short time.This then flattened as we met the runners coming against us starting their very steep section. A left turn brought us to another steep unrunnable section for a short period before turning right back to the aid station.

14 laps was a long marathon (26.75 miles) with 15 or more being an Ultra. This was as tough a course as you could come across and the warm weather made it even tougher.

Round and around we went. It was slow going with not that many people ahead of me I was averaging 12 to 13 minutes a mile. Half marathon came at 2hrs 45, it was going to be a long day. The wedding party out on the course was a distraction but the heat was very wearing and the near endless climbs took its toll. Many stopped early. I was expecting very few to go further than marathon and was surprised when I noticed the leader in the marathon continuing on for extra laps.

I struggled to a 5:44 marathon. As the first marathon time home was 5:16 that made me feel a lot better. Meanwhile the leader had lapped me and I noticed her going out on lap 17. As I came to finish the marathon distance she lapped me for a second time and she stopped. I felt Ok and kept going determined to do 18 laps. Also going well was James, who I guessed was just behind me. I came round thru 17 and kept going. 18 came and went and I kept going. James finished at 18 and I was confident that as I came through 19 and the finish that there was noone else left. As it turned out I was right and 19 laps and 36.25 miles was good enough for my first ever race victory. YAY!  I was knackered.  As well as an epic medal and winner badge I also earned my 500 miles with SVN marathon series. I reckon that was my 18th run with them.

I felt Ok and headed for home. Bad traffic and 3.5hrs got me back to Basingstoke on a bank holiday Friday evening. 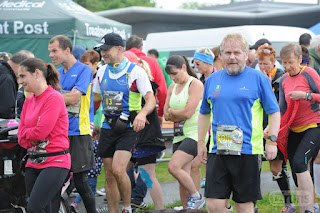 It was an early start again on the Saturday as I headed for the Cyclopark near Gravesend. I had run here before on a trail, this time we were actually on the park for a 21 loop marathon. This had been regularly voted a top 10 event in the UK and it had a huge reputation. Many who were running on Friday were also here. My legs were completly shot especially the quads but I was here.

Off we went. The first lap was a short one and we were given elastic bands to count down the rest. It was just over a 1 mile loop with one long drag and one long down hill. After a couple of loops it was impossible to tell where you were in the race as it was all mixed up. As you passed the start finish line a big screen gave you the number of laps competed so it all worked well. I got the feeling that this race was better suited to spectators as you could sit in one spot and people passed you often. It was also quite sociable and there were great aid stations. The weather was better for running than Friday as it actually rained for long periods which kept the temperature down.

As my legs were shot I had no expectations and was quite surprised that I came through half way in 2:06. I kept going and actually ran the whole race. I had myself come through marathon distance in sub 4:20 but found the race a little long with my official finish time being 4:25.

Nice video of the day

This was a good race that was quite unique and the medal was truly awesome.

I am back again in Sept for its sister race the Coyote.