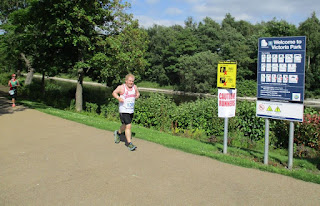 This was the national 24 hr championships held at a new venue in Victoria Park, East Belfast.

Kris and I represented Crusaders at this event. I took on the 12hr event option and Kris took on the 24hr event. It was moved from the Mary Peters track as a dress rehearsal for the World 24hr championships that are due to be held here in June 2017.

Around 150 took part in the 24 hr, 12 hr, 100K and team relay events that were all on at the same time on the same course. The main event being the solo 24hr event. Everyone arrived hours early to setup their stalls. The Fil-Irish had a full self sufficient

village setup, beside them encamped MCI and opposite them the Trailheads with DBRC split between their own tented village and closer to the start-finish with the Mayflies. Also there was the Irish defense forces tent that you could have parked a jumbo in. Lots of various clubs mainly from the north fitted around these areas and we in turn fitted in around these with our Aldi tent and Lillian's table.

Parking was an issue as we had to park on the far side of the carriageway and hump all our gear across the foot bridge. I was able to move the car in the middle of the night to the main car park but this may be something that has to be addressed for the worlds. 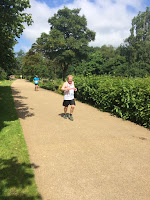 The Victoria park run went off at 9:30 am together with some of the relay guys and the atmosphere started to build. Registration was simple and efficient and we were given 2 numbers for multiple shirts as well as what turned out to be useless florescent band. At 12 noon we were set off by Mary Peters and spent a few hours getting used to the route. The 100K was the first race to catch fire as in the mens section the O50 world record went in 7:07 with the winner lapping everyone at will. The ladies winner in 8:10 also ran very well and I believe she just missed out on a UK team qualifying time by a few minutes.

The weather was very humid from the get go and temperatures were a lot higher than expected and when the sun came out there was lots of red faces and bodies around.  I suspect there was little sun cream on. Even early we saw some of the top guns struggle and there were regular drop outs during the day.

The route itself was flat and around the periphery of the park. As the day went on even the slightest incline became noticeable as did a slight camber. The path was rock hard concrete that pounded the body and was no doubt the reasons for many blisters and dropouts. In the inside of the path was a lake that was nice for the first while but became unnoticeable later.

Championship Ireland timing was used as the timing company. As you crossed the mat at the start/finish line your distance and no of laps came up on the screen. There was sometimes a significant lag which meant you missed your name and someone shouted after you and there was a major malfunction for quite a while late on the Sat which meant no-one had a rashers where they were. But it all came back and everything was fine. I had one query about a missed lap but that got sorted quickly and without fuss. 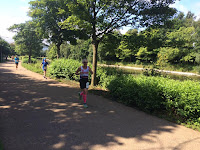 There was a great atmosphere through the tented area and the support was relentless from everyone for eveyone. I felt everyone knew my name (It probably helped that I had "Lundy" on the front of my vest and "Leo" on the back. It retrospect I wonder how wise it was wearing a "Lundy" shirt in East Belfast coming up to the 12th July. My choice of Ambroisa Creamed rice and bananas with Coke and water seemed OK and I didn't try any of the sweet stuff and there was no need for Gels. There was a bewildering range of food on display from everyone.

On the course itself in general things were good but there were quite a few locals with attitude out there demanding that they walked 3 abreast or had their dogs off leads but in particular kids riding bikes against the runners was particularly annoying. However the marshals were fantastic and always supportive.

Kris mean time had long overtaken me but I got a shock as I passed the first aid tent and there she was (about 8 hrs in). It turns out she had blistered her toe and it was not in good shape and had spent 25 minutes with the medics getting it sorted. After a change of shoes and socks and major toe stuffing she soldiered on (no doubt in pain).

There was very mixed fortunes with everyone else. Some DBRC were having stonking runs (Gary in particular). I didn't see Anthony all day even though he must have passed me at least once as he ended up a couple of miles ahead. Mirko who is normally around me also must have being going at a similar pace as I only saw him once. Collette was flying and went on to do a massive PB (there is definitely 50 miles in her) and walked away with a special achievement award as the oldest athlete. Brenda was struggling a little and called it a day at 100K, Sean was really struggling and was at least 4 hrs off his normal time for his 100K. Teresa due to injury was walking her 100K and went on and on and on, it was awesome to watch. Ger called it a day after 60 miles. Sharon and Anne were steady and paced 100 miles perfectly. Paddy, Enda and Derek also paced things well and got their 100 miles.  The Fil-Irish were struggling except Rex who had a brilliant run. Don had a PB and Donna gave up twice and had a mid-race love affair. Finn and Catherine started slow and steady ended up in a fantastic battle for 2nd and 3rd place with Catherine being victorious in the end and both took home national medals. There were so many stories going on it was overwhelming and I am sure I have missed a few and I apologise. 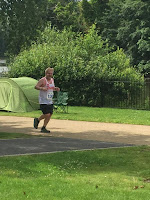 50 Miles was passed in 9hrs and double marathon in 9:30. I was well down on my Portumna 100K time and was slowing to 13 or 14 minutes a mile with stops every lap to take on food and water. Given it was my 5th Ultra in June what did I expect.

Night fell and the much talked about temporary lighting came on. It was fine and it was actually quite a bright night anyway and warm with temperatures not dropping below 13 degrees. There was certainly no need for head lamps. The event supplied Pasta (Tuna , Yum) was delicious as was the porridge in the morning and as everyone had there own supplies it wasn't really needed except maybe for the supporters.

The last 2.5 hrs I managed only 10 miles which included a big effort over the last miles as we got close to the end. In fact the last mile was close to 10 minutes as we went as far as we could in the 12 hr time limit. The hooter went off at midnight and we planted our flags and all the 12 hr people stopped and waited to get measured. There was lots of hugs. As we walked back to the tented area we passed all the 24hr guys starting their second half and I was glad I was done. In total I managed 63.85 miles or 102.77K which was the furthest that I have ever ran.

Kris's day went from bad to worse after having got over the blisters her ankle started playing up and she decided early to walk the last load of miles to get her 100 miles and stop immediately. This undoubtedly was to do with the surface. She managed this in 21:28 and earned the coveted 24:00 100 mile club jacket which this year was in DBRC blue. Job done.

In summary I think there are things that need addressing for the world championships including parking and the public on the course. The surface will be tough but I doubt there is much that can be done about that. But I am sure that will be all sorted out and it will be roaring success.