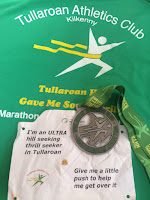 I was a relatively late entry into this event and am using it as my last long training run before the 100K in Portumna. Vincent Guthrie is the race director and I always have promised myself that I would do one of Vincent's races in his home turf. It was also Catherine Gutherie's 100th marathon and had shared a lot of Catherines events over the last few years,

It was an early start at 3:20am to get breakfasted and on the road for the 1.5hr drive to Tullaroan in Kilkenny. We were due off at 7am and I was on a tight time schedule for the day so was not going to start late. I picked up Kris at 4:15 and an uneventful trip got us to Tullaroan early. This was my first race in Killkenny and county no 31 in the my UK and Ireland County challenge.

It was muck spreading season and Tullaroan smelt beautiful in the warm early morning. It was funny seeing Kris gagging on leaving the car declaring it smelled just like Laois.

Vincent, the RD got us parked up and we met with Louise who had made the long trip from Galway and was also early. At 6am registration opened and we got our numbers. It looked like there were 37 entries in the first running of this Ultra. There were also 3 starts to the marathon with those also doing Derry and Cork joining the 7am start with the Ultra. There was much talk of hills. It made the results of the marathon quite confusing as the top 10 came from a mixture of all 3 starts. We briefly met Catherine on her 100th but the way the events fell I didn't see any of the 8am or few of the 9:30am start marathoners and it was also Paulo's 100th but I didn't see him.

Vincent did a quick funny race briefing around 6:55 and the Ultra guys walked about 400m off course for their start while the early start marathoners started at the bridge just as the Ultra guys came past. The first mile and half was relatively flat as we exited the village and hit the country roads. I felt uncomfortable from the get go. Immediately wanting to go to the toilet and sweating profusely  and it was very salty and cutting the bejeysus out of my eyes. We turned left and started a long climb. The climb was endless and generally up for the guts of 5 miles and eventually eased off around the 10K mark. It was relentless. The front of my calves were also killing me at this stage. I stopped for an elongated toilet stop just before the top of the first part of the climb. Done, I then filtered back in near the back of the pack.

I felt a lot more comfortable and set about catching everyone that had come past me. First up was Derek and Shane who were running with John Dolan from DBRC. I stayed with them for a bit but John and I pulled away on the steepish downhill section after the house with the gnomes.  We turned left and passed a well stocked aid station and kept straight on for once a flat bit. I pulled ahead a little form John but heard a shout "Leo this way".. I had missed a turn and was happily going the wrong way for around 100m. I got back on course to find it was actually well signposted and I had obviously just zoned out. I would rue this 200m detour later as it cost me one or two places.

I pushed on from John and was shocked at the hill at 10.5 miles which for me was unrunnable and I hiked up it (it lasted about 1 mile), but then enjoyed the predoninantly downhill last couple of miles back to Tullaroan village. This was really a terrible first loop for me at 2:03 and all aspirations of a sub 6 or even a PB were gone.  Lap 2 started and felt way more comfortable than I did the first time round despite the heat rising . The highlight of this lap was Bob Cahill passing me in the lead of the marathon. He had built up about a 100m lead at his mile 8 (my mile 21) and looked comfortable. The heat got to him and he was eventually caught, but managed a 3:01 for second place. But his course record remained in tact. Meanwhile the heat had seriously turned up and it was well in to the 20's of degree in heat (some estimated 24 or 25). There was next to no shade on the whole course and the wind was marginal. Elevation turned out to be >750ft for every 13.1 mile loop which was a very hilly marathon and well over 2000ft in total for the Ultra. Near the end of lap 2 I also caught up with John and Shaun Boyle (not related I think) whom I had been with before my toilet break. On the downhill at 23 miles I pushed on and was soon on my own again.  I was through marathon distance in 4:13. It was great to see Gina from smelly Laois on the course with her dad supporting. That was a big and unexpected lift.

The third lap was pretty uneventful, just hot and hills. Luckily there were a lot of pop up aid stations and I reckon there were 8 on the lap with water, coke, sweets, jaffa cakes and sun cream. There were well needed and much appreciated. 6hrs was gone as was a PB 6:24 but I felt that 6:30 was possible. I pushed really hard over the last couple of miles (sub 9 minute) and spotted what I thought was another Ultra runner about 400m ahead. We had filtered into the 10K, Marathon and half marathon at this stage so it was busy. Coming into Tullaroan I had cut the defecate to 100m and kept pushing. By the time I had come over the bridge it was down to 10m and he came across the line 4 secs ahead of me. He was 9th finisher and I was 10th in 6:26 , damn close to my PB and but for that 200m detour.

Kris meantime had run a steady race with each lap under 2hrs, for a sub 4 marathon time and a 5:58 overall time and a massive PB. This gave her 4th overall and first lady for a famous victory.


I cant fault the organisation. There was a wonderful atmosphere and a fantastically organised race and a feed that would choke a horse at the end and there even was a bar and an ice cream van.

I had to rush home to Dublin for a dinner appointment but it was a good day.