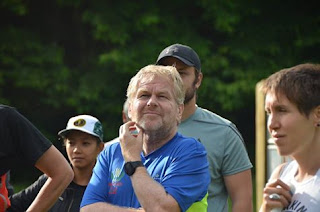 This was a couple of themed 8hr timed events around Kings Wood in Kent.

Not only was this a run but in line with the theme for the day there was a cookie baking and fudge making competition with the entries becoming part of the aid station. It was amazingly well supported with many cookies and fudge flavors. Fudge was my favorite and Jackie Hearne is a goddess.

The run itself was around the forest park. It was hot on both days and humid from early. The course was also very hilly with an estimated 100ft climb per mile on average. That was >3500ft on day 1 and 3200ft on Day 2.

Starting from the aid station we headed steep downhill for around 800m. This was rough flinty ground with lots of trip hazards and included 200m of an open field. Reaching the main fire trails we turned left and kept descending (sometimes steeply) following the main fire trail. The trail was in good condition and if you wanted you could let go on this section (I didn't).  The down hill wandered deep into the forest and was very far away from everything. There were a few dog walkers but apart from that the forest was ours. After about 1.5 miles we reached the bottom of the downhill section and started the first climb. It was steep (un-runnable after 1st loop for me) and lasted about 1/2 mile before flattening for around 800m. Followed quickly was  another steep downhill for 100m which led to the second steep climb of the day. This was shorter and steeper and again un-runnable. Cresting it was a flat and gentle downhill for a couple of minutes. Turning right we hit the longest and main drag of he day. It was runnable in the early laps but eventually it was a run/walk for most. It went on forever with many false summits (probably lasted only a mile or so but felt longer). Eventually we crested and turned right onto a long gentle downhill on good fire trail. Turning left of this trail, we hit a rough section downhill for 800m that was muddy and slippy on day one but Ok on day 2. Turning left we entered a steep uphill section that was muddy and rough. We kept ascending through a right turn. From here we climbed until we reached the small out and back section retracing our initial steps over rough ground for 800m back to the aid station. The loop measured 5.37 miles , had 500ft of climb and it was 5 laps for a marathon and 6 or more for an ultra.

Over the 2 days my quickest loop was 52 minutes and slowest was 1hr 10.

On day 1 I had the strategy of not taking cookies at the aid station. This saved me 15-20 minutes on the field but when I finished there were no cookies left. I didn't make that mistake on day 2 of the fudge. 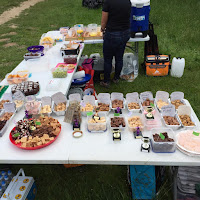 It was slow going and it was hot and humid. I had decided that on Day 1 I would go for as long as I could starting  my Lap 7 after 6hrs and 25 minutes. Coming in after the 7hr cutoff I had to stop. Fortunately for me others also found the day tough and most finished at marathon. Noone stopping at marathon distance broke 4hrs (but 1st and 2nd overall did). It turns out I was the only person that did 7 laps with 2 of the younger faster guys managing to do 8. Amazingly I therefore came 3rd overall out of the 120 finishers covering a nice 37+ miles. Given this was only 4 days after my first 100K that wasn't bad.

On Day 2, I was sore as hell and from the start took it easy and had every intention of stopping at marathon if I could even do it. It was slow and pain full stuff and I absolutely loved the fudge at the aid station. It naturally took a lot longer and surprised myself when I went out on lap 6 to make an ultra. I thought I would have no chance of making lap 7 so discounted it. Then Ellan Yak came past with about 1.5 miles to go and disappeared into the distance. My watch told me if I ran the rest of it (uphill) I could just make 7 hours and have an option of 7th lap. Off I went and I managed to keep Ellan in my sights and by the time we were on the final stretch uphill she was only 50m ahead. We met Traviss at the bottom of the out and back and he said "will you catch her ?? Maybe not" and I kept going. Ellan was walking the last bit and I drew level. I was desperate to make a sub 7hrs and kept running to the end. When I arrived at the aid station (6:56) I was given the option of doing another lap but declined. I managed in the end 6 laps for 32+ miles and 12 spot out of 112 starters. 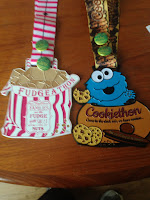 The medals as always were fantastic and this brought my weekly mileage to >130 miles. WOW!

Now for some rest.