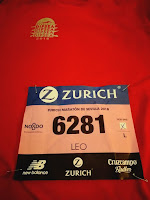 I was back in the sun. Similar to 2016 I was down in Spain anyway on business both the week before and the week after. This time Linz was also dropping down for the weekend.

I flew in from Barcelona on the Friday night. It was a late flight and I got straight into a taxi. Knowing that there was a minimum taxi fair out of the airport when he threw 24:55 on the meter it was no surprise. Since the hotel was right beside the expo I knew it was only 10 minutes but this was the easiest way. The hotel was lovely and not hugely expensive but I literally was only here to sleep. 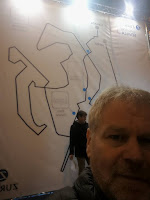 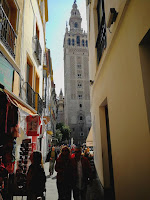 I got up earlish had a niceish breakfast and headed off to the expo. It was about 500m walk. I got there before it opened and there was a small queue. It was smaller than I remembered and I quickly got my number and goodie bag. Again there was a fantastic running jacket included instead of a T-Shirt. I didnt hang around too much and remembering the transport system from last time walked to the circular train and got the circular to St Bernardo. There I picked up the Luas which brought me through the old town to Cathedral. The htel was a further 10 minutes walk. In the meantime Linz had made her way from Dublin and we arrived at the hotel at the same time. The Hotel Cerventas was brilliant and again very reasonable. A lovely night out in the old town had me off to bed early.

I was up and away early on race day. A 45 minute walk had me at the stadium (I joined thousands walking there as well). I quickly left my stuff off at the baggage in the stadium and made my way to the start. I have to say I didnt have too much time standing around and I settled in beside the 4:15 pacers. Even though I knew lots of people in the race I saw noone I knew. Pretty much on time we were off.

I stayed with the 4:15 pacers for the first few miles then let them go. Aid stations were every 5K and there was mat timing every 5K as well. The route was actually a lot more boring that I remembered except for the last 10K. I was through 5K in under 30 mins and 10K in just under 1hr. It was a fairly pleasant day and as is the way with these types of races it was busy. Support was pretty good all along the route. I came through 20K in just over 2 hrs and half way in 2hrs 10. I then as am tending to do these days eased off and went for a walk/run strategy in the second half.

The 4:30 pacers came past at my mile 16 and I thought they were way ahead of their pace and there was a relatively small crowd with them.

The last 10K of this race is brilliant and it was also getting fairly hot. As we passed through the old town you had to have your wits about as we continually crossed tram line and mingled with tourists. But that is the way it is. As I approached the stadium, there was a steady stream of people walking back and I tried hard the last few K to get under 4:40. I was really delighted to come in about 20 secs under in the Olympic stadium which still needs a resurface.

I picked up my medal, picked up the beer, oranges and goodies on the go and got my gear. After what seemed a hugly long time retracing the last 3K I was back in the old town and met up with Lindsay.

A quick bath and we were out in the town. We shared a few glasses of wine with BOK and his soon to be wife Sarah. BOK had managed a 2hre 30mins 45 secs marathon. He was in bouncy form.

I enjoyed this marathon again this year (despite being 1hr slower than the last time) and may return in the future. We were again lucky with the weather. I still cant believe I didnt meet anyone I knew.