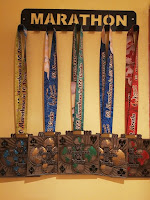 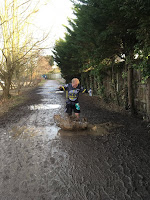 I've been thinking about the best way to report on this treble and since they were all on the same course with pretty much the same field and pretty much in the same time it is best to report them all at once.

This was actually part of a quad but to go and see my son I decided not to run on day 4. This decision was made at the start so it ever was going to be a treble for me. Even still I intended to go Ultra every day so it was daunting enough. The race series was put on by Phoenix Running and was on the Timed event course which was 3.28 miles long and is known as the bridge course as you have to cross a relatively short but steep bridge 18 times for Ultra.

From my house this is one of the most convenient courses and I am generally there within 30 mins. 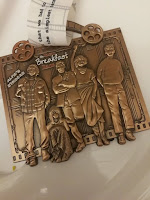 Day 1 was "The Breakfast Club" themed and registration was in the leisure center as normal. Philip and Francis had traveled over from home for the first couple of events. The highlight of my day was before the start when I got presented with my 12 marathon in 12 month medal (Average 3:44) to be the first person to receive a Global Marathon Challenge Grand Slam.

It should be noted that the state of the course was very muddy in the muddy sections which was the first 1.5km and the section just over the bridge otherwise it was OK. But it was very muddy. There was a slight detour allowed on the upper path for around 800m which helped. 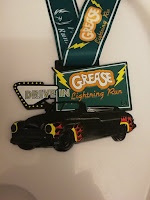 This was a deja vue day except it was a little slower.  DOMS kicked in bad today and I struggled to get any pace going.  It was also very slushy and muddy which slowed things down further. I came through marathon in 5:40 and went out again for the ultra lap. I suspect I was one of the last still left on the course today. 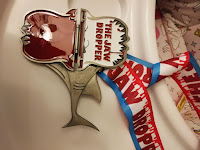 Brenda came along today for her marathon #308 and I ran a lot better today in fact I was through marathon distance quicker than day 1 in 5:13 before really slowing down on the Ultra lap coming in just over the 6 hour mark.

All in all a good race series that was perfect training for longer things to come.

Stats of the treble