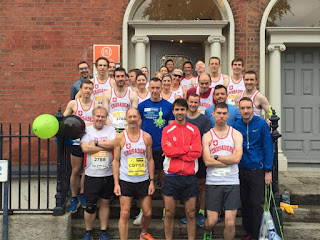 This was my 13th running of the Dublin Marathon and my slowest. This year it was on a Sunday again and they had opened the entry upto 20000, making it one of the top 4 biggest marathons in Europe. Sunday is good and they handled the extra crowds with no issue.

Organisation was flawless and the weather was perfect and probably the best conditions that I have actually run this event.

It was a long weekend that started on Friday with the Crusaders "Pot Luck" dinner at Coach Cottles house. A very relaxed affair with loads of carbs. I had to leave early to get to the airport to pickup my guest for the weekend Costas. Saturday started with a parkrun in Cabinteely where I was Lantern Rouge and was last over the line in a sprightly 46 minutes (given that I was tail walker). It was Orla, Neil and Kate's 50th parkrun and there was cake.

Walking from the city centre, the afternoon was at the expo. It was good as always and an interesting goodie bag accompanied my number. There were loads of people I knew at the expo. A dart back home was curtailed by engineering works at Connolly and a further walk home was not in the plan. That was too much walking the day before a big event. A good nights sleep and an extra hour in bed had me at the bus stop at 7am. You would think I would know by now that buses dont go that early on a Sunday and after a 20 min wait it was into the car and park in the normal spot beside the Pepper Canister church.

For the first time I made it to Bob Manson's office to leave my stuff off. This was very generous and great to see my club-mates before the start. But in future I think I will use the baggage collection area as I love the atmosphere here particularly afterwards (so much human debris) and it is a bit out of the way when picking up the gear afterwards. But it was good to get in the club photo for the first time.

A quick walk had me at the start line early and I had decided to have a strategy of starting at the back of the wave, try for a good start and stay ahead of Olwyn's 4hr pacer group as long as I could. On time we were off in perfect conditions with even the sun coming out to help us on our way. 27 mins got me through 5K and I had a forced toilet stop soon after. The wind was into the face for the first 10K and I always feel this is the toughest part of the course. I still managed through 10K in 57 mins (right on 4hr pace). I kept pushing for the first half except the up hill after the underpass at Kilmainham (I now regret that). The toilet stop meant that I just missed the 2hr half and at 2:03 it was still my best half marathon since Limerick in April. The pace groups slowly began to reel me in. I had started just with the 3:40 guys and by half way the 3:50 just came through with Rolando leading the charge (apparently the were 6 seconds up at half way).

I then slowed down immediately and the second half was a true walk/run suffer-fest pretty much all the way. I went through a very bad patch around 15 miles and recovered but at that stage it was pretty slow going.  Eventually just past Terrenure Olwyn , Joe and Don came past. At that stage I pretty much gave up. It was 19 miles in and I decided to just take it easy and enjoy the last 10K odd.


I love the new finish from Nutely Lane through to Merrion Square. I think this should be kept as the atmosphere is just super. Unfortunately I was too slow today for the Cru corner as they disperse as soon as the 4hr pacers come through, but never the less it was a great atmosphere for the last few K.

Support as always was amazing. It was absolutely relentless and up there with New York and London. I was absolutely delighted to come in under 4:40. My knee survived and I now hope that injury is gone. Nice goodie bag and T-Shirt and wonderful medal were the prize today.

Lots of festivities in O'Donohoes, Foleys, The Gingerman and the Bankers was great after with loads of people staying. I think I saw everyone. That night I went to the club dinner at the HQ which was a lovely finish to the day.

Special congrats to my O50 Cru team for national silver and Leinster and Dublin Gold. I would have had to go sun 3:22 to be a scorer this year. What strength in depth we now have.

If you have never done Dublin. Do it!!!