Another Run Bites The Dust 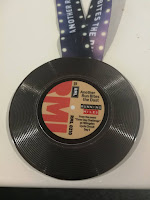 The Cyclopark in Hilington, Hayes in West London was hired out for the day for our exclusive use. It was organised by Running Miles of the Dorney Lakes runs (Neal Skeltons cousins) and it was the same setup. I like it, its simple, easy and efficient.

This was day 1 of 3 and a music themed event as Hayes is the home of Vinyl records. Traffic was pretty bad getting there but even still it was only 50 mins from the house and I got there very early. Number picked up and cup of tea in hand there were quite a few who were at SVN the day before and a few more doing 4 or 5 days in a row.

A quick briefing at 9:20 and we were off. The track was relatively flat though final elevation stats showed >1225ft climb. We basically followed the twists of the track from one end to the other turned around and retraced our steps to the finish. All in all it was a 1.88 mile loop and a novel way using Velcro to count the laps.

Everything worked like clockwork and round and round we went. I decided to go out relatively fast and came through half marathon in 2:10. Given the tough day the day before I eased back at this stage and started to walk the hills. They were short but frequent and kept churning out the laps. I was well under 5 hrs when I came to marathon and started to notice a few others going out in Ultra. I had every intention of going Ultra today and went out for 2 extra laps.

There were a few fasties there like Steve Edwards but I heard them saying course was long and they were a few minutes off. I found my Garmin to be very accurate and came in for 30 miles. Nick Nicholson as he is want to do went for 3 extra laps for a 50K+ to keep his world record attempt on track. Nick was the only one to go further than me today.

After I finished I picked up the very nice medal and goodie bag and headed off to the airport straight away. I like Running Miles events.