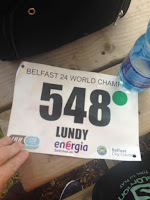 It was actually less than three weeks since the Endure 24 (100 miles in 25 hrs) and a subsequent ultra and hilly marathon that same week. In reality, I was in no way recovered. But I decided to turn up and do my best and experience a world championships. I was travelling on my own with no crew as I knew that as soon as I was done I would be heading home.

I stayed at my mums house the night before and left early to setup in Victoria park in Belfast.  This was the same venue as last year and there was lots that needed to improve from last year. Fortunately a lot was, with for example,  the course was now  closed to the public and all in all facilities were much better. Timing was an issue last year and unfortunately it was even worse this year with the screen that showed runners how many laps they had completed seemingly down more than it was up.

The first person I met was Lillian who was there crewing for a Belgian couple. She immediately offered her area for me and it was perfect right beside Finn and Pat and close to the MCI marquee and right beside Ryan and the Ballemena runners.. I was among lots of friends. I quickly checked in and immediately moved my car to what I perceived a safer area close to Syndam train station (but who really knows in East Belfast in July). I setup quickly and was ready to go. I knew lots in the open race and a few in the international section as well so being on my own was no issue.

Ed Smith gave a functionary race brief at 11:45 which was simple and fine.

Time moved quickly and in no time it was nearly 12:00 and the start. I walked to the start with Collette who was running in the FO65 section. When I heard that her main competition Ann Bath (who was there) had pulled out through injury, I knew she was going to have a special day. The Fillipino team with Rex, Rolando and Mylene (all regulars) was there and excited doesnt describe them. Mylene's husband Pete offered their aid station for anything we needed which was great. 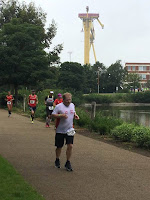 We lined up behind the international athletes and we were off on the button of 12.

The field was peppered with world champions, national champions and record holders of note including the Badwater 100 record holder and trans america record holder. The current world record holder from Poland would go onto beat her own record today. The womens USA and Poland teams had an epic battle and ended up less than 1km apart at the end of 24 hrs. It was brilliant just being part of it.

I was quite surprised at the lack of early pace by most of the field and 8 minute miles or slower seemed to be the norm. I however started off at 10-11 minute miles. The weather was super for running and apart for a drizzle for a few hours in the afternoon conditions were good. I quickly got used to being lapped but that was expected. I kept up this steady pace for the first half marathon which I thought to be honest was too fast and pulled back a little. I didnt spend much time in the aid stations and though laboured felt Ok.

It was great to see some supporters (who I pretended were there just for me but were really there to witness everything). Paul Rodgers from Newcastle was there and we had a brief chat as he soaked it all in. My brother Aidan turned up as did Joe Quinn and Lynda from EDAC. I had a chat to them all enroute.
The biggest party however was with Philip, Jill, Susan, Carmel and Neil  who had the BBQ on the go and the Vodka and coke was flowing. I even partook of a burger just before dusk (thanks philip but it did lead to a 22 minute mile). This was after their double marathon over the weekend.

On the course I came through marathon in a slow time and to be honest wasnt really feeling it. I thought I would last to 50K and call it a day. A lot of people seemed to be struggling but equally some were going great including Finn and Collette. Pat pulled out early with PF. I was joking on the way round with Paddy Rowe that I wouldnt finish until he did and he kept going and going.

Anne Jenning was going fantastically well and got through 120K in record time but she went down hill rapidly after that and pulled up. Sharon Wilders also pottered around for 90 odd miles which more than exceeded her expectations. Lito whom I ran and chatted with for a while also kept going and going (not quite sure how he finished up). Denis Keane running in Vibrams had a great start but struggled the last 40 miles but managed a strong finish for circa 110 miles.

50K came and went and my next goal was 36 miles.There was lots of encouragement from everyone not least the international athletes with Lousise giving out encouragement to everyone. Catherine seemed to be struggling but would go onto run well. The Philippines team kept on going and national records were set. Thomas from Austria who I meet often running in the evenings around Dublin also gave lots of encouragement.

36 miles came and went and next up was 39.3 mark which again was reached. Lillian was encouraging me to at least try for 50 and off I went. I was however slowing and doing an increased amount of walking. Fairly quickly the surface caught up with me and my quad started hurting. This seemed to be a common complaint and I hobbled around for a few laps but was unable to run on it. I was 10 hrs in at this stage and losing a lot of ground and was just about on 100 mile pace but I knew in my heart of hearts it wasn't going to happen. So after 43 laps and 44.3 miles I handed my chip in and finished. Even when writing this in a beach bar in Crete I have no regrets as I was only going to hurt more and have to walk for 14 hrs and that would not have been fun and I have recovered quickly since and getting ready for the next adventure

One amusing thing that happened when I finished was I went looking for my medal. They seemed to have gone missing and I was dispatched to a far tent on the course where I found them hidden unguarded in a tent.. 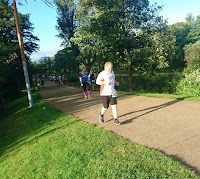 Finn went on to comfortably finish 100 miles as did Helena Dornan. But performance of the day went to Collette who didnt have to do what she did to secure the gold medal but kept going with a smile on her face for all 24 hrs to win the world FO65 world title (I am so proud of her) and bagging > 90 miles in the process a personal best by close on 50 miles. Amazing really.

I picked up a nice jacket and buff and left very soon after with around half way gone and headed back to Dublin.

The surface claimed a lot of victims but those that survived it managed amazing things. It was a pity about the timing which let down what was otherwise a fantastic event. If we didnt need reminding how tough our sport was, 2 runners ended up in hospital but I am glad to report both are now home.

Im not sure I would go back though if the event was held in this venue again. The surface is too hard.