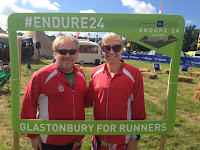 This was an accidental 100 miler. My preparation was awful, in that since I fell in early April I have been really struggling with knee problems, and frustratingly it has only very very slowly been getting better. It has meant that I have not been able to run mid week and May was the least that I have run in years. 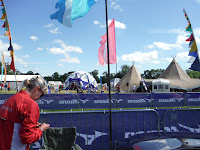 I was encouraged however that Tullaroan recovery had gone well and my knee seemed reasonable and I was confident at the very least of making the start line.

I traveled over with Kris who had been in brilliant form recently and was using this as a training run for her big 48 hr attempt in July. As this was to be held in Aldermaston in Berkshire, it was very convenient to my house in Basingstoke and a nights sleep was followed by a lie in and a trip to M&S and Asda for breakfast and supplies. For me today it was mini men, rice pudding, coke , fruit and Irn Bru. 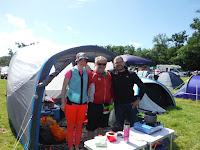 We arrived at the venue at around 10am for the 12 noon start. I have to say I have never seen such facilities in a running venue, with a bar, massive village and as much camping as the eye can see (great toilets and showers). It really is setup for teams, families and supporters. As we were both running solo we had no tent, family nor supporters. We were also late and just about managed to squeeze into the solo parking area. I was amused about being given out by a duo team who had a massive tent and lots of family and supporters for us taking up one car space. Beside us was Chrisie and Ellie (supporting). Chrisie was on her second attempt having run 95 miles the first time in 2014. As it turns out I never saw her at all as we were on the same lap the whole time. I'm glad to report she came 4th lady home and managed her 100 miles.

We didn't know what to expect in terms of the course. We had heard rumours of hills but was not prepared at all for what was in front of us. Also as it turned out neither Kris or I needed a tent as we both stayed on the course for over 25 hours (you were allowed to finish your last lap that you were on at 24hrs). The weather was also forecast hot and it got into the mid to high 20's during the day and maybe 16 at night (no need to run with a coat).

Also close by was Jools ably assisted by his partner Kat. They had prime position and  knowing Jool's form recently that he would blast this race. We spent some time with them before the start.

At 12 noon we were off. There were around 3000 runners in total with most in teams of 2,3,4,5,6,7 or 8. It seemed that with solo's there was about 1000 on the course at any one time. It was very crowded at the start with lots of walking in the first 800m and even more when we got to the "Hill of no return". I walked this hill every time until the cattle grid at "The  church view crossing".  I then ran for about 400m before being forced to a walk again up to the first crest (tough start) at just over 1K. The next 1K was relatively flat though undulating on nice forest trail.  K's 2-3 was punctuated by what is known as "Little steep" which was a near vertical 200m section that took all the puff out of you. It did lead to a quite wide forest section that was gently up hill past "Far away forest" that ended at 4K at the VW van cocktail bar

that was blasting music out all day (quiet at night). 4-5K was gently down hill past a lake and you eventually got to a very well equipped aid station. This was a prelude to "Heart Break Hill" that again was an unrunnable 900m hill that crested at the "Dark Damp Swamp". I was glad to see this every time. Then came a very technical part of the course as we went downhill through the "Fairy Forest" with lots and lots of trip hazards (it

was all lit up with fairy lights at night and even had real fairies at one stage). Coming out of the forest there was a short very steep downhill section before a more gentle 1K downhill section that wound its way back towards the start. Another twisty bit through a forest brought us back to the campsite which we ran around before coming across the start finish line at 8K. It was hilly. Just over the start finish line there was a tent with water and a drop off zone for refreshment.

I did out a plan,  but early on because of the hills I was way behind. But as the plan was for 22:30,  I always knew I had a little in store so never felt under too much pressure. Because of my knee I was always prepared to drop out at any time particularly when I went over marathon and Ultra distance.

At marathon distance I took off one of my knee braces as it was restricting blood flow. That helped, and the single band did the job for the rest of the day. I was slow all day coming through marathon in 5hrs 15 and 50K in 6hrs 20. This was way down on normal. 50 miles was 11hrs 10 (way way down). I remember coming through 100K in 13 hrs 45 mins (a good 1hr 45 down on where I wanted to be).  But still I kept chugging on. I sorted out a blister on my big toe but didnt go near what was happening on my little toes. Gators worked well keeping out the stones and mud.

At dusk I stopped to pick up a head torch and put on mosquito spray. I inadvertently got some on chaffed areas which hurt like hell and some on my lips which swelled up (that was scary). It turned dark around 10pm and the head lamps came on. I immediately noticed what I thought was millions of insects in the torch beam. It was in fact rain, that stayed with us all night and softened up the course somewhat (It was steady). As it wasnt cold I stayed in my Tshirt (Poor Kris was only in a vest). I had now settled into a 1hr 15 to 1hr 20 lap times and kept fairly consistent from here on in, though there seemed to be a lot of walking in the later stages. There were some familiar faces like Richard Boese and Noel Keenan who kept the spirits up and Jools and Kris lapped me every 4 or 5 hrs and they shouted encouragement.

At about 20 hrs in I knew I was going to finish and quite enjoyed the last few hours. Some of the faster teams were still spinning around but the field was visibly thinning as people just gave up (particularly the solo's). Generally there are only 15 people go 100 miles or more. This year 30 went over 100 miles.  Jools finished at 100 miles in 21 hrs for 6th spot over all. Kris however passed 100 miles and kept going and managed another 3 laps for 115 miles, 3rd overall and 1st lady. She also managed
the 2nd longest distance by a woman on the course since the event started.

I came through 19 laps in 23 hrs 40 and started my 20th lap. I have to say as time pressure was off I walked the last lap in a very sedentary 1hr 50. When I eventually came around they were dismantaling the course and the prize ceremony had started. I picked up my medal and watched Kris pick up her trophy and then we were both inaugurated into the Endure 24 100 mile club.

It was back to Basingstoke for some sleep and a bath. PHEW!!!!

Stats for today (because of forest cover GPS is a little short).