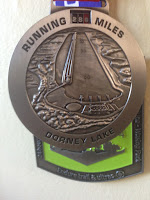 I was in the area and I signed up for this one. I knew it was only going to be 4 days after Endure 24 but I had never guessed that I would have done 100 miles the previous Sunday. Still it was a 6hr challenge and it was flat and I didn't care if I was slow.

Dorney Lake was the Olympic Rowing venue that is now attached to Eton college and the course was basically out and back's along the lake. It was a 2.62 mile course so 10 laps was a marathon.

The event was run by Running Miles who turned out to be Neil Skeltons' cousins and I talked to a couple of his cousins afterwards. Around 80 turned up for race and I knew quite a few. There was even a few from Endure 24. Richard was there, he had excelled in a team and Hannah who was a solo at Endure and had completed 12 laps (60 Miles) and would do 3 today.

Everything looked good with the organisation. There was plenty of toilets, the aid station was
awesome and there was sponges and loads of water. We headed off on time and I started slow around 5hr pace and was walking from early. The route was pretty non-descript. Wide tarmac flat roads along side a lake that you could see from time to time.  You turned just before the main rowing boat house and on the way back you got a glimpse of Windsor castle (the queen was home).

I plodded round, talked to Pam for a while and watched some of the fast ones speed by.  Craig Lovelock really has got fast recently and wasn't that far behind Steve Edwards. Lee was late again and was as usual blaming May. It got very hot and everyone was suffering. I came through half marathon in 2:35 and trudged on with a walk run strategy. I was well down the field. But since it was only a 2.62 mile loop it would have been remise not to try for one extra lap. At lap 7 Lousie Tidbury lapped me but decided to stay at my sedentary pace for the rest of her run. It was her 98th having come off a DNF at last Sunday's SDW100 and was suffering from an achilles problem and was protecting everything. She really is a lovely young girl with an exciting future ahead of her as she moves to Cumbria later in the summer. She helped the time pass quickly and she was done. I still had another lap to do and headed off. I was well under the cuttoff when I finished my marathon and headed out for one more lap.

I followed Nick Nicholson around as he continued his epic year and finished 28.8 miles in 6hrs 15.

The medal was unique in that you could move the base and front independently to reflect the miles you had completed and you also got a goodies bag with ice cold coke (YAY!). I probably should not have done this but it is done. Amazingly few went out for ultra today and I came 8th overall (which is a bit of a cheat).