When Collette O'Hagan announced this event a few months back I have never seen as much good will towards an event ever. There was just positive energy (north and south of the border) everywhere and help offered from all quarters and we were all kept abreast of what was happening by the very informative Facebook group page that was setup. It was a great showcase for Dundalk and Louth.

Collette with MCI's backing and a hoard of volunteers were well ready in advance. Being thoughtful Collette had even organised activities for the kids.

The Rosewood Country Club (formally the Sportsman) was a fantastic HQ with great facilities including free parking, a great hall and toilets. Being just off the M1 it was one of the more accessible venues if you came from the south or the north and there was a great mix of both.

It was to be a road marathon (maybe a half as well next year)  in and around the Cooley peninsula just North of Dundalk. It consisted of a 800m out and back followed by a 15 mile loop and a smaller 10 mile version of the same loop. It was shockingly hilly but very picturesque as you got off the main roads.

Organisation during the race was faultless with very well stocked aid stations every 3-5 miles with
everything you would want. The marshals were just great. There was two starts a 8am start and a 9am start.

Kris and I traveled from Crusaders and arrived just after 8am to see the back of the very large 8am start heading off.  Registration was a breeze and we picked up our numbers and chatted with many for the next hour which flew by. Since we were passing HQ 3 times you could leave your stuff there for handiness.

We were off at 9am with the first mile a short out and back. The field quickly spread out. My strategy today was do a fast first half and hang on. To this end I went out at sub 8 minute mile pace as the first section was flat. I however hadn't factored in a strongish wind that was into the face for most of the first 10K. 5K was passed in 24:30 and 10K in 50 minutes. Kris had stayed with me (this is her marathon pb pace) and after 10K she and Michael McKeown form East Down AC headed off into the distance and I lost touch with them before 10 miles. I was through 10 miles in 1:23 and this is where I came across Eimear Hurley who had come a cropper and was getting her knees bandaged. A quick high 5 and I was off again.

It was very rural and there even was a man on the side of the road with a big gun. 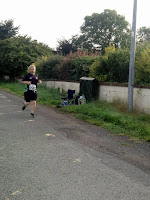 My plan was half way in 1:49 but the unexpected hills and wind had put paid to that, but I was still through in 1:52 (this was the same as Longford a couple of weeks ago) so I knew there was plenty of work to do to break 4hrs particularly as this course was way harder. Fortunately, while still having sore feet I didn't blister today (No Hoka's) and I always felt my pace was good enough.  The end of the 15 mile loop brought us on part of the tow path that is used by the DUNE race which was very pleasant running. Overall the scenery was fantastic and it was a great challenging loop (except the nasty little incline about 1km from the finish).

The second 10 mile loop was similar except you were directed through some short cuts but it still had plenty of hills. I was doing fine upto 20 miles (2:53) but struggled with the last 10K. In fairness it was a tough last 10K. I even caught Michael McKeown near the end and had a reasonably strong finish for a 3:58:11 and was delighted with sub 4 no 54 and 49th marathon in the last 12 months.

Kris meantime had a 1:48 first half and came home in 3:43 for first lady home and had a very enjoyable run.

Afterwards with Tea and cakes and sandwiches there was a great
atmosphere inside HQ as everyone from the 8am and 9am starts came across the line. The was great excitement as Team Kerr came in. Also inside HQ there was a Heineken Lite promotion with free beer. What wasnt there to like today and I have to say the best MCI event that I have been to and gives Craughwell a run for its money as the best small event in the country.