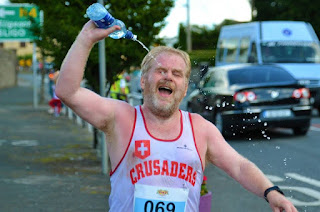 I ran Longford half in 2004 and 2005 but the last time I did this marathon was in 2006 and felt then it was a reasonably boring and somewhat dangerous course (there wasnt as many events back then. Longford was one of only 5 marathons in Ireland in 2006 I think). In fact it is the only AIMS recognised event that I know of that has the field running against traffic at 100km/h for elongated parts of the route. I never felt comfortable with this and still don't. Despite this its a fantastically organised event and traffic and the route is my only gripe.

I was back today to give it another go. I have had a strange couple of weeks after tweaking my back in sofa-bed gate. This week I also had a significant work issue that meant that I didn't get out training at all. Ironically this enforced taper seems to have helped not only my back but also my knee which has been playing up recently. With all this in mind I had dropped down from the Ultra to the Marathon.

There was to be a big Crusaders presence at the race with participants in the Relay, Half, full and Ultra. Most had traveled down the night before but I decided on travelling on the day. As the start was 10am it was a relatively late start at 7am from Dublin and got me to Longford at 8:30. Unfortunately I just missed the start of the Ultra.

I forgot how well organised this event was and compared to last week in London it was chalk and cheese. I picked up my number , T-Shirt and amazing goodies bag and got ready. It was due to be sunny so I lathered on the sun cream.

The half, relay and full all started at 10am for a short loop around the town before heading on the main Sligo, Westport road. After about 2 miles the half split left and that is the last we saw of them. I started off pretty OK coming through the first 5K in 25 minutes despite a head wind. It was warm and getting warmer. I don't like this bit of the race as we are coming against oncoming traffic.

Dipak and the 3:30 pace group came past just outside Tarmanbarry which brought up 10K in 50 mins. Things felt good. In Tarmanbarry we turned right heading towards Roosky. Then at mile 8 I felt a burning sensation on the soul of my foot. I was wearing relatively new Hoka's and I knew I had to sort this. I stopped a couple of times to re-adjust my sock. The third time I felt a blister come and I popped it.

I still managed the first half in 1:49 and at half way the 3:45 guys came passed (a little ahead of pace I thought). It was also getting hotter and hotter and I was taking on a lot of water and dousing myself heavily.

Just after Roosky we turned right onto the N4 and back to heavy traffic. I spotted an ambulance at the relay handover point and stopped off to remove skin and Vaseline. This cost me time and I was being passed by many at this stage. It took a few miles for the foot to settle but I think this finally sorted it. It was still getting hotter and hotter and we were now directed off the N4 onto  the back roads. One of the best things about these types of events is how the locals help out and there were several home made aid stations that were great. I was still on for a sub 4 at this stage but it was going to be tight.

From time to time the Cru relay teams either passed me on foot or in their convoy or cars as they kept up with the race. I've never had so much support in an event.

Directed back on the N4 and the traffic I was struggling and now my damn nipple started bleeding. I suspect this was from the amount of water I was throwing over myself and I was soaking. The leaders in the Ultra came past and I kept plodding along. Then at mile 23 we hit a little bastard of a hill and I  walked (boy do I now regret that). James and the 4hr pace group (all 2 of them) caught me at the top. This was an 11 minute mile and killed my chance of a sub 4.

I however picked things up again in the last 2 miles and got pace back but it wasn't enough as I came into the finishing chute and wonderful finish area the 4hrs ticked over and I finished in 4:00:53 for 100th position overall. 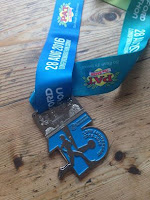 There was much excitement at the finish as we waited for the leader in the womens Ultra to come through. Cru meantime had come 3rd in the marathon (well done Brian) and another 2 in the top 15 (Paul and Rob just outside 3hrs). Kate had a brilliant half for 1:40 and massive PB and 11th lady overall and the Relay team's had come 1st, 3rd and 4th. Everyone seemed to be 10 mins off their time today.

Things hit fever pitch as Kris came into the chute as the leading lady in the Ultra and came across in great style for another famous Ultra victory.

Apart from the pain, missing out on a slam dunk sub 4hr, traffic, a boring course, bleeding nipples and a blister the size of Achill. I enjoyed Longford much more this time.