This event was run by Rik Vercoe and his Phoenix Running race series.

This race celebrated an 'advanced' anniversary (48 years in advance to be exact). In 2063 the PHOENIX spacecraft, will make the first warp speed space flight and humans will come into contact with Vulcan's for the first time. It's 'First Contact Day', we are not alone folks!

All the while Captain Jean-Luc Picard and the crew of the USS Enterprise-E battle the evil Borg Queen to ensure the survival of the human race and stop us being assimilated into the collective. Come on, First Contact is the greatest Trekkie film ever!

So 'First Contact Day Run' celebrates the 'flight of the Phoenix spacecraft' on April 5th 2063 and is a 6 hour timed event.


With this in mind there was lots of fancy dress and it was a beautiful day on the Thames tow path. With Connemara Ultra in mind I wanted to do an easy pace but if the opportunity arose to do a sub 4hr.

It was on a 3.28 mile loop so regular sub 30 minute laps was 4 hrs. The out and back loop was very flat and there was some mud that was very manageable and you could avoid most of it. There was small bridge around the 1 mile mark and I managed to run this all 16 times. 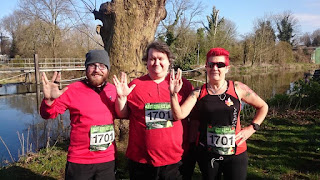 That was a disappointing 7th Lap but apart from that it was OK.

The aid station was wanting for nothing. The counting system worked flawlessly and the volunteer marshals were very supportive. It was great meeting everyone 16 times during the race and there were lots of speedy runners there today.
Strava stats for today below.