I wasn't too keen on this race as it never has been one of my favourites mainly because of the Relay runners, particularly when your tired in the latter stages. I also find the course not that interesting with 2 or 3 sections just plain boring. But I was entered and it is my home marathon (and my first) and my family were coming to support so I did it. There is a new trail marathon chalked in for November in Newcastle. That will become my new home marathon and I doubt if I will ever do this one again. It was my 6th attempt with the last one being in 2009.

It was also 10 years to the day that I did my first marathon ever (Belfast 2004) and I am glad to say I was nearly 33 minutes faster today despite being 10 minutes down at half way on my 2004 splits (The second half of Belfast 2004 was special).

Another thing I don't like about Belfast is that the finish is 2 miles from the start. Experience taught me to park at the finish and walk in which I did. It was a cold blustery morning and when I got to the city hall I met a few of the guys who were complaining about. paying £10 for parking the city centre.


There were also lots of the MCI and DBRC crowd there. Most were having their second run out for the weekend. Either at the IMRA Ballyhoura mountain marathon (all reports was it was a dog!) or Limerick. Gary Reinhardt in particular was just off a 3:23 PB run in Limerick and would go on today to clock 3:41 today. Also there in numbers were some of the EOA crew running in fancy dress. They passed me at 5 miles and I never saw them again.

I stupidly decided to go out with the 3:45 pacers who bizzarly started ahead of the 3:30 pacers but they sorted themselves out after the first mile. The start was out the Newtonards road and back in on the Sydenham bypass (YAWN!). Not the most inspiring start to a run. It got a bit spicier when we came back into the city and headed up the Falls. You could smell the fresh paint from the new murals. It had been a long 4 days in politics on all sides.  Gary and Leslie passed me at the Falls leisure center and I slowly dropped back from the 3:45 guys around mile 10 (they were to stay together for the rest of the race). I knew at that stage it was going to be a tough day. I came through half way in 1:55 at the top of the Antrim road. The rain then started and was with us for the rest of the run.

Today I went through 2 very low periods when I nearly lost the enthusiasm to run. One was at 16 miles (when Gillian Barnill fresh of a 100K race on Saturday swept past) and the other at 19.5 miles (when the 4 hrs pacers passed me). I was drained and tired and didn't really want to go on (ever). The wind didn't help as when we turned onto the tow path at Gideons Green we were blasted into the face for the next 8 miles with little respite until we reached the Ravenhill road. Through the industrial estate at the bottom of the tow path, it must have been low tide as there was an awful smell of raw sewage for about 3 miles. This was not my best time ever running. 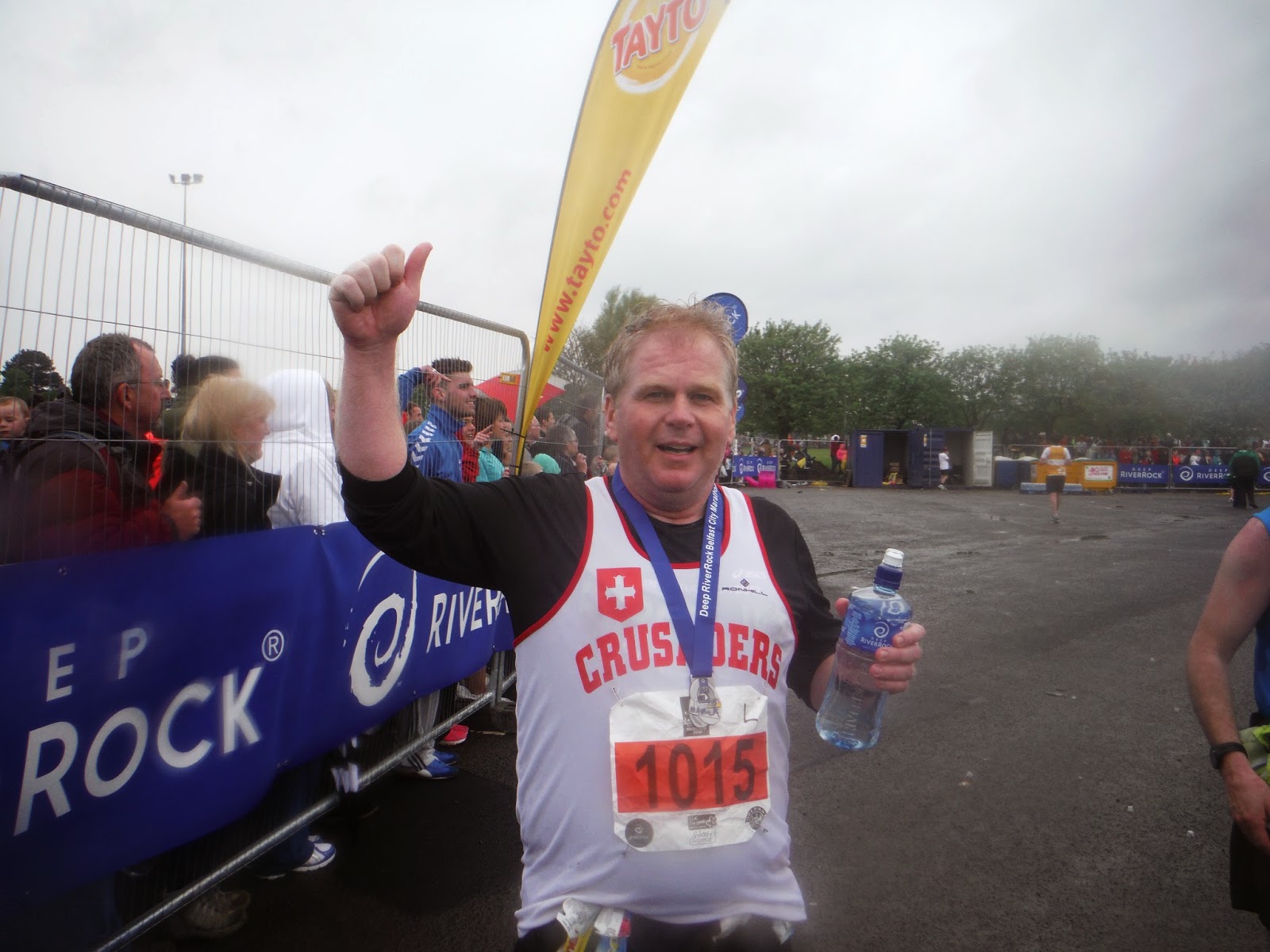 At this stage, I was resorting to a 1 mile run 0.1 mile walk strategy which though slow kept me moving. I was absolutely delighted when at the 23 mile mark at Ormeau bridge I got a big "high 5" and "Come on Leo" and "Go Crusaders" from the fantastic  Yvonne McCauley fresh off 3rd place on Saturdays BHAA race in Dublin and today ran 16 miles (3 stages) in the relay. This was quickly followed by my sister and her family at the gates to Ormeau park. I ran the last 2 miles without stopping catching a lot who had taken me on the Anadale embankment earlier. I sprinted the last half mile for a 4:09:55 (just 7 seconds off last weekends time in Craughwell).

I met up with the family (McVeighs and my brother Aidan) afterwards and that was real nice. But I think this is my last Belfast marathon.