Luckily I was able to take advantage of a business trip to do this race.

Arriving via London I got to the hotel at 8pm the night before the race. It being a real early start the next day and it being just over an hour drive, I was up well before dawn and in the car and ate breakfast on the hoof. I headed South West out of Austin towards San Antonio for about 45 minutes before swinging right onto B roads at Dripping Springs. Things got quite narrow and even included a Ford across a small river and a close call with a deer. Eventually finding the entrance to the ranch (Flat Creek Crossing ranch) where the race was going to be held it was still dark but there was a convoy of cars at this stage. I followed the crowd which brought me straight to  the car park in a field beside the race start. As with all american races I have done it was impeccably run with many portaloos and quite a few people who had camped over night. Some even stayed without tents.

The temperature was rising and by the time I picked up my number it was already well in the 80's and humidity was rising.  I finished the breakfast that I had bought in Walmart the night before and I lined up with the 30 or so other for the early start of the marathon. It was now roasting. I had with me a hand held 500ml bottle and a neck buff soaked in water. Registration was a breeze

This is the first US event that I had been to with no national anthem but there was plenty of patriotism around with one guy carrying a massive US flag for fallen soldiers. The temperature rose to the mid 90's and stayed there all day. It was very very humid. A half marathon was due to follow us after a 30 minute wait and they pretty much caught us and passed us enroute. 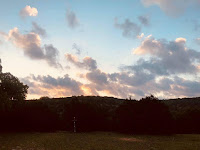 The race was 2 x 13.1 mile loops. It was called the switchback marathon as it continually switched back on itself many many many times (see course map below). Interestingly the way the ranch was laid out you often seen people running in all sorts of directions but you never actually knew where they were the course and amazingly we never crossed. After about 3 or 4 miles in I was firmly at the back of the pack and melting. I was joined by Agatha Kerr from San Antonio and we decided to stick with each other for the rest of the day. She was a fascinating lady who was just getting into the marathon/ultra scene and was due to come to the UK and Ireland on a vacation later this summer.  We chatted for many hours. I found the track very very stony and hard going and at times had a significant camber. 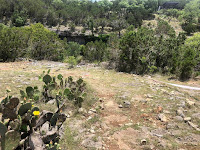 The aid stations were amazing with ice, fruit, savory, sweets, coke, juice and iced water available as well as anything else you could ever need and the bounciest of helpers. The course was really hilly (>2200 ft (GPS lot a lot in the forest))  and with the temp and humidity it was just a long slog. I was in no hurry and was just enjoying the company. At its highest points there were great views. 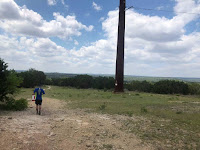 After aid station 3 we started to descend down towards the finish area and this was the prettiest part of the course with stretches along cliff edges and through an amazing tunnel through the rock face beside the swim hole. 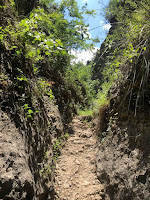 The first 13.1 was in a very pedestrian 3hrs and when we went back out for the second half it was more a walk/run strategy than anything else. The heat was relentless and I was glad to see every aid station as we trecked/jogged our way round. There were lots of very strange insects and I even managed to get a quick glimpse of a snake. Did I mention the heat was relentless.

By the time we finished (~7 hours) they were packing up and Agatha and I had become firm friends and she showed me around San Antonio with The Alamo and river walk the next evening. I look forward to returning the favour when she visits the UK and Ireland over the summer. She is currently booked in for Dark Phoenix in London and the Celtic Warrior in Lilliput as well as the Rock and Roll half in Dublin. We are considering the Streets of Galway as well.

Amazingly I came second in my age group and as well a T-shirt, locally produced wooden medal I won a customer cow boy hat and $60 voucher. It was a good day.