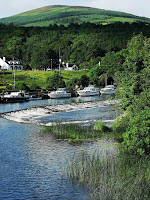 I wanted to do this event for several reasons. The first is that it goes through Carlow and that is one of the few counties in Ireland that I havnt done. Also a few years ago I entered this event and pulled out for some reason that I couldn't remember. It was 60K and there seemed to be a reasonable cut off that should not be too much of an issue. There was also due to be a marathon and a half on during the day. 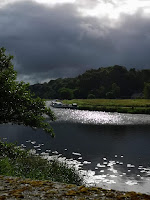 It logistically was quite complex in that you parked in Carlow ran along the Barrow Valley to   Graiguenamanagh with an out and back at the end for Ultra distance.  The whole route was along the river and canal system (with an additional out and back for the Ultra). When finished there would be a bus back to Carlow. Simples (NOT!) 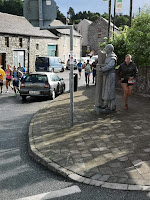 Then news came through of a change of route. Because of roadworks Carlow was effectively no go. So the route would be from Graiguenamanagh and do the out and back first then run along the Barrow Valley for 13 odd miles and return to Graiguenamanagh. It actually worked out a lot simpler be it a few extra miles to get to the start line for me.  The new route still went through Carlow PHEW!

Well everything seemed well organised and it was a new crew to me that I had not came across before. They all struck me as quite young, but that was OK. Everything seemed in hand with medial support and extremely well stocked aid stations and marshals everywhere. Registration was a breeze.

The Ultra started first (by 1hr 30 mins) and we all headed off South West along the river for 4.8 miles out and 4.8 miles back. It was very pretty. In fact I loved this course that meandered along the river valley. The river was busy and interesting and there was very few people around. 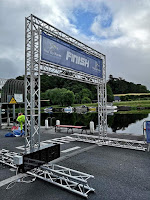 Everyone seemed to go off very fast and I found myself right at the back of the pack. Normally people come back to me but today they didn't and I found my self plumb last all day.  I passed all the Ultra guys on their way back on the out and back and the leader shouted at me "are you with Crusaders??" It turned out to be Dominick Brannigan from Crusaders who is an amazing runner and he easily won the day.  Ironically Crusaders were at the head and tail of the field today.

It was hot and humid and lots of insects were there all day.

After the turn around I noticed a 4x4 following me. It was from the local river authorities and I assume with the race. It would follow very close behind me for a couple of hours and was a bit creepy But I was last and I was just hoping they would not insist I would pull out.

I got back to Graiguenamanagh after about 1hr 45 mins and effectively joined the marathon route. I had long since lost sight of anyone in front and toddled along. After the next aid station I was met with Dominick on his way back and he was quickly followed by  more ultra guys, marathon guys and half marathon guys. I couldnt tell who was who. I knew relatively few in the race.

I was slow and turned at the 23 mile mark in roughly 5 hrs giving me a marathon time of 5:40. Everyone was fast today. The next 13 miles was run walk and I toughly enjoyed it. It really was a beautiful day. I checked with the organisers about cut offs and I was well under and when I finished was still 40 mins under. By the time I got back to village the race was being packed up but they were still at finish line and I got a nice welcome and got nice medal and T shirt and a very nice can of coke. There were showers and food still in the hall but I had to get back so thanked them and left. 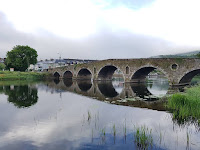 It was very nicely run and I would do this again but I dont know if I would be keen to be last again.