This was a sort of double in that I did day 1 and 3 of the Sharkrun tripple that was held at the Woosh Canoe club along the banks of the Stort River near Sawbridgeworth and Harlow in Essex.

It was forecast to be hot and humid (even very hot and very humid).

The event was about 1 1/2 hours drive away and on day one and I arrived early at 8:30. Having ran the course before I knew that I could park the car on the route and have my own little personal aid station that I would pass every 40 minutes or so.

Picking up my number and using the facilities I chatted to a few and settled in for what was going to be a hot and humid run. Knowing it was going to be hot I had put out of my mind any thoughts of doing an ultra and would quite happily settle for a marathon

That marathon would be 8 laps of the 5.27km course. Having run the course before I knew that it was flat with a couple of drags but half would be in the shade and half in the direct sun. The direct sun would be the killer. It turned out to be 28 degrees and very humid.

Off we went at 9:30 and I started pretty good running 33 mins for the first lap and following that up with a 35 mins second lap. The temp started to rise quickly and everyone was suffering. The lap itself was as expected. The first .8 mile was on open tow path with no shade. It would be a tough section all day. Turning past the locke and over the bridge we thankfully hit shade that was with us all the way through the back half of the course. There were a couple of sharp rises before we climbed the bridge at the far end and returned again in open sunshine for last .9 mile. Cruely we had to pass the aid station before clocking up a lap. I had parked my car at this section.

The disaster struck in the middle of lap 3 with a sharp pain in my right knee. This was not the normal knee pain and it reduced me to a walk. I just couldn't get started running again. Thinking hard what it could be, I realised that I had changed the insoles in my Hoka's the night before and I was convinced this was a gait problem. I hobbled to the end of the lap and luckily had with me the old insoles. I replaced them and started on lap 4. It seemed to work and though painful was able to get back up to a jog again. With all of this messing I was through half way in 2:45.

The second half was a hot, hard , painful slog. Fortunately I found a standpipe close to the first bridge and made sure I had a bottle with me to fill and tip over my head on each lap. I slowly counted off the laps and found myself tooing and fooing with Davo. He eventually passed me half way through the final lap and we both put on a spurt to get through the finish in under 6 hours.  We managed it easily coming home in 5hrs 55. Give I didn't really know if I was going to finish at all I was happy to get there in the end.

I left straight for home. Being Friday and the M25 it took close to 3hrs to get home. Not nice.

I was even more delighted to be able to line up on Sunday at day 3. This time it was forecast even hotter and it came in at 32 degrees. This time I brought a coolbox with lots of iced water and boy was I thankful for that as it was available to me every 5K or so. 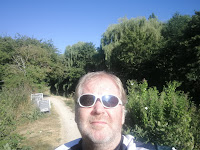 It really was a deja vu from Friday except it was noticeably hotter and everyone was noticeably slower. I got the shock of my life when at half way David Brett stopped just as I came through myself, I later heard Ruth and Gary Wayman also stopped early.  This was unheard off. very few went Ultra (I think 2)

But it was very very hot and humid and tough going.

There was an ice cream van there all day which was great.

I actually did the first two laps slower than day 1 but made up all that time in lap 3 and lap 4 and managed to come half way in 2:38 some 7 minutes faster. But similar to Friday the second half was long, hot, humid, lots of standpipes and very slow with much water tipped over my head.

The coolbox worked really well and I had chilled coke all day and I picked up 1 500 ml bottle of water for lap 8 and it was half frozen still and slowly thawed out as I went round. I made a real effort on the last half lap and came in 5 minutes faster than Friday in 5hrs 50. Hopefully that is the last of the hot hot hot running for the year.