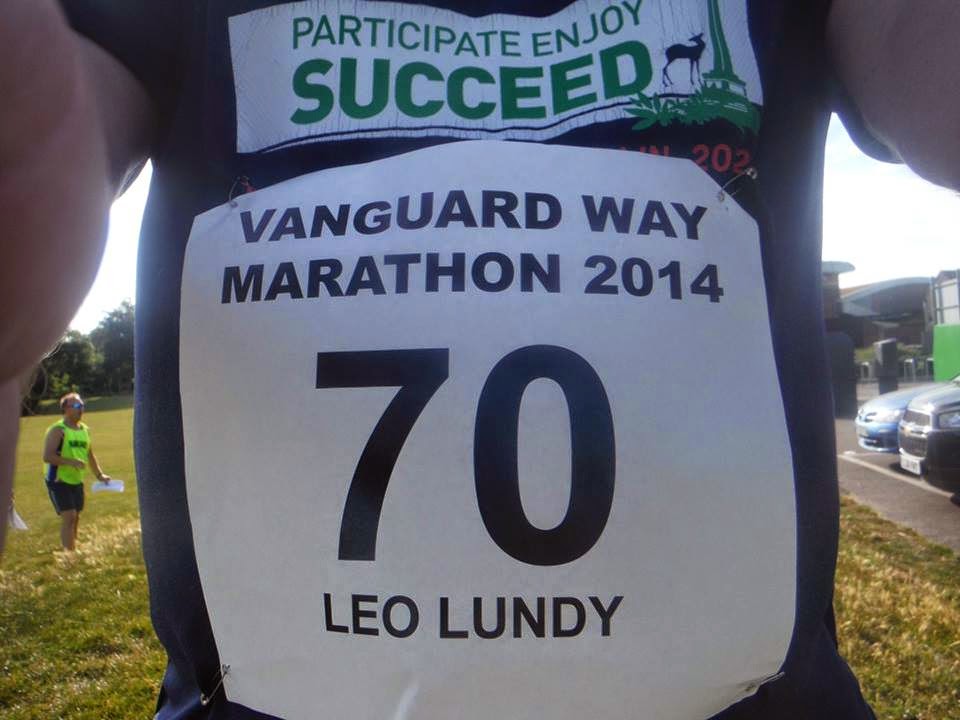 The time is a direct reflection of the conditions and the difficulty of the course so I'm not too worried.

This race cost £15 and was organised by members of the 100 Marathon Club UK and was well attended by the club. For £15 there was a fully serviced race and changing rooms with showers, Technical -T and an engraved medal as well as loads of marshals and a lead bike.

It was a trail marathon that followed the Vanguard Way trail just beyond the M25 and back, mostly along the North Downs. It was self navigable and reports from previous years had it a difficult one to follow.  I carried instructions and my glasses and hoped others knew the way. I'd also heard it was hilly but I had no idea how much.  It was hot with temperatures raising to 24 degrees quickly.

Close to 150 started the race.

The first 7 miles were steady up hill, skirting housing estates and entered the Vanguard Way Trail.  Some of this up hill was quite tough and lot of people were trekking the steep bits. This was not going to be a fast one. I stuck to the trail quite well at this time running with a local. Several times the same people passed me obviously having took wrong turns. Definitely some urchins had moved the marker tape and repositioned it just to confuse everyone.

Eventually after 10K we came to the first aid stop which was welcome and well stocked. Everyone was
carrying Camel backs or extra water which was refreshed. The next section opened up a bit on the North Downs and we crossed some open fields (full of bullocks, bulls and cows) before hitting some serious hills. On the way out there were two serious down hill sections that were unrunnable with one very long steep up hill section. This was as hard a course as I have come across. At times we could see the M25 but were way way above it and then of course right beside it. At the turn around there was the second aid station. I got here at 2:30 and it was hot.


I found the way back a lot tougher with 1 steep and 2 very very steep hills bringing us to the 20 mile mark. They were truly the steepest hills I have ever come across in a race and were barely walkable. Add to this I was now on my own and got lost several times. One time I was well off piste and only that I say a runner way back that I knew I had to retrace my steps. I eventually got back to the aid station at the 32K mark. Amazingly I had remained in exactly the same race position all the way through since around 10K. I really struggled through the last section, and came in knackered and  in my slowest ever marathon time.

When I finished marathion 2 started as it was now 3:40 and I was flying from Southampton at 18:15 and had to get back to Basingstoke to leave the car off, yomp to the train station, and then get a train to the airport. I made it with 5 mins to spare and only I had pre printed the boarding card I would have missed the flight.

Happily I was seated in Gaffneys of fairview by 8:30 enjoying a few Guinnesses....