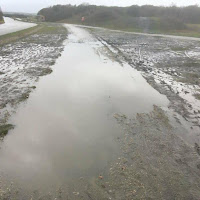 I was back again to try and tame my Bete Noire of a course where I had been timed out of an attempt to do a 10 in 10 ultra. It was to be the exactly the same 4.37 loop. The only major issue for today was that it had rained for 2 days solid which meant it was going to be a mud fest.

The usual gang had turned up for the 9:30 am start. Registration was in the cafe where we huddled before going out into the zero degree temp for a race briefing and the short walk to the start.

About 120 toed the line. We were off with a run across the grass for 100m before traversing some clag and we were soon on the normal Fowlmead loop. Immediately we hit the massive puddle on the first corner that was too deep to go through so everyone gingerly went around it with jags and branches hitting you everywhere. Some smart ones found a way around the back of the bush that avoided this puddle. Soon the feet were soaked.

Its safe to say the rest of the course was for the first few laps avoiding the big puddles and using the grass as much as possible. Even this got very squelchy and muddy and un-runnable.  Once the rain started (and it never stopped) even that became impossible and it was a slosh fest of going through the puddles or trying to avoid them. I wore a coat the whole time but ditched the hat and the gloves after lap 1. The coat was needed as it stopped the core getting cold. 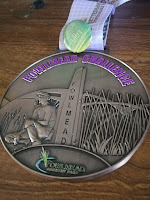 I made steady but unspectacular progress coming through half way in 2hrs 25 before slowing in the second half, having to stop at the aid station every time to bring on fluids and calories.  I was pretty much on my own all day and well under the cut off.

There was absolutely no chance of me not going ultra today and the poor marshals and clippers who were drowned just shook their heads as I turned for a final lap at 5 hrs 20. After the ultra lap I also did the out and back for 50K distance and was very very glad to get off the course and into dry clothes for the 2 hr drive back.

That was the last event of the year which was 55 marathons (of which 27 were ultra). That will never happen again.