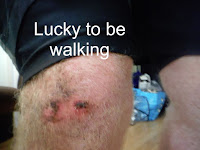 After the extremity of last weekend on the track this was never going to be easy. But it was an 8hr challenge and you can do anything in 8hrs, right??

This was on a new route around Ranscombe for me and was allegedly the hilly route and was predominantly the regular routes in reverse with a few addons. The forecast was hot hot hot and there was no mud. Being spring there was also a chance of seeing a wild flower or 2. 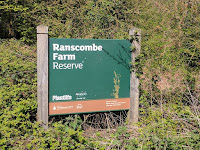 Because it was a b2b with the Ranscombe Spring challenge the day before and also Brighton, SD50 and Paris were on this weekend it was a reasonably modest field at 60 and a lot of the usual's were missing. Still there was Philip though with his dodgy ankle didn't go far today. Gerg and Janet were there out flying the flag. Nick Nicholson was there on his quest and he tells me that Guinness only recognise Ultras of 50K or more which means a lot of what he has done to now has been wasted miles. He would be the only person to go beyond 50K today. I didn't see her at all, but I did hear Fiona there. Checking the results she wasn't too far behind me all day. Also there was Gary Wayman extending his SVN ultra record (27 miles+). Last but not least there was Enda Cleary who the day before had run his 100th marathon and was the newest Irish guy with that honor.

It was an 8am start and pretty much everyone was there early except Leon who took a wrong turn and ended up in Ashford and arrived with seconds to spare. It was hot from the get go starting at around 10 degrees and rising rapidly to mid 20's by late morning. There wasn't a cloud in the sky and it would have been a lovely day if you weren't running. From time to time there was a slight breeze.

The loop itself was 4.37 miles long which is a great distance for a loop as you can break it up into very manageable sections. After 100m of steep tarmac downhill we turned left into a forest section that was undulating and full of trip hazards (more of that later), after about 800m you exited the trees beside the railway line and for the next mile gently climbed by the railway line, relentlessly up. At the 2nd bridge we turned left again and faced the fist significant climb of the day. This was close to a mile long with most people walking at least half of it (This was still on the reverse of the old course). Cresting we turned a sharp left down a fire road that was very steep and short downhill. Coming through a kissing gate we entered the ploughed field section that had a nice sweeping downhill followed by a steep climb out of the field through a kissing gate hugging the hedge up up up to the top of the field.


Following the edge of the field all the way round was a steep downhill section that brought us around to the second steep climb of the day. It was only 0.15 miles long but was nearly hands and knees stuff until you crested at the "He loved this view" seat for splendid panoramic views of North Kent. Turning right through a kissing gate and back on the old course in reverse a mile downhill eventually led to the main open field which was traversed to the Gas station (it stank of gas). Through another kissing gate and another steep up hill brought us to the last up hill section close to the aid station and we were done.

Due to the heat and the hills things were slow with only one sub 4 marathon from Martin Devine and even Lee Rogers coming in at marathon in 4:40 (wow!).

My own race was over after 800m, as when up at the front of the pack I hit a stump or log or root or something and had the most spectacular face plant. In slow motion I went down knowing it was a lottery if I could get back up. First my hands hit and I felt the gravel embed in my palms. My forearm hit a stump and is bruised and sore. Next my right knee took my full body weight and on the hard mud surface was lucky it didn't twist. Finally my shoulder hit and felt like I had just let off both barrels of a shotgun. I immediately got up and feigned Okness. Lots of people stopped to help but I said I was Ok and they headed on. I was far from Ok and it took a few minutes to gather myself. My choices were to go back to the start and go home, do one lap and pick up a medal and go home or something else. I decided to hobble on and see what happens. It took a couple of miles of hobbling before I was even able to get a jog going but even at this it was hurting. I was more than likely last at this point. I finally made it to the aid station after an hour and again feigned OKness when questioned and decided to go on. The minimum from here was a marathon or it was a waste of time. 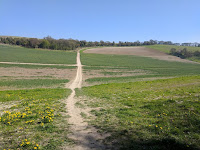 Jimi Hendrick tells me that the log or root or stump has become known as "Leo's log" and people are warned off it ahead of time.

The next few laps were painful as I felt my knee every step of the way. In fact it was only when I got to 20 miles was the first time I didnt feel it. Half marathon was 3hrs odd. Now to say the trail was easy is wrong as each mile had about 150ft climb which is in the upper end of very hilly. Still I was way down on normal.  Never the less very few people were lapping me and it was only as I was coming up to lap 6 that Gary Wayman came past with about 1 mile to go for his 7th lap. I tried my best to keep with him and as we approached the aid station I just about unlapped myself and found myself out on lap 7. For a few laps I was having a too and fro with Emily Holland and she duly came past me in the middle of lap 7 to take the honors.  Most stopped early today and only Nick went out for 8 laps and I ended up in 9th place. It took 7 1/2 hours and it was roasting and it hurt like hell.  I'll be glad of the couple of weeks rest now.