Larmer Tree Marathon 5:23:46
This is one of White Star Running's signature events run around the depths of rural Dorset and Wiltshire. HQ is Larmer Tree Gardens with all the facilities that you would need for such an event (except showers). 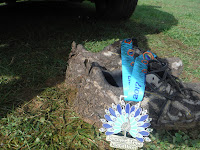 The weather all week had been wet and hit and miss and the forecast was for rain. Given thie weeks rain there was lots and lots of mud but fortunately the rain stayed away for the most part during the race except for the odd smattering.

The race was effectively one big loop with only one short section traversed twice.

Its hard to explain how difficult this marathon is. Estimates for the climb go from 2500ft to 3500ft (I think closer to 3000ft). It has lots of long long drags as well as some vertical short hills. Conditions under foot were generally awful with mud being pervasive and if you were not running around it you were sticking in it. Compared to last year (2016) conditions were much more difficult. Results showed that everyone was 1hr to 1hr 30 mins slower than a normal marathon.

I picked up Brenda at 6:30am and an uneventful journey (in the lashing rain) got us to HQ for 8am. A quick registration and loo break (in the many portaloos) and we were pretty much straight on the start line. It was such a different crowd than at the London/Kent races but there were still quite a few familiar faces. The Twins Theresa and Julia, who are seeking entry into the Guinness book of world records for twin running were just off the back of the Thames Meander the day before, as was Costas. Emine was there as was Carolyn who had the job of sweeper today. Jeremy Fuber was there and it was great to catch up with Anna Hatton after a long time.

After the race briefing by Andy Palmer we were off. I remembered that the first 8.5 miles were relatively easy but I obviously mis-remembered, as there were 3 or maybe 4 climbs that I had forgotten about. The mud hit us immediately in the first couple of miles and it was a sign of things to come. The only road section on the course is also early in and around the village of Farnam. Even with these relatively good starting conditions compared to the rest of the race I just about scraped 6 miles in the first hour.

This initial part was effectively a loop back to the start area and we came past the large monument that you can see from the start finish area. We then headed on a couple of miles that we would return on later on the race. The mud was awful. Then at 8.5 miles the first big hill hit. Its difficult to explain how steep this was but Brenda's nails still have not recovered from digging into the earth for grip (it didnt help she had road shoes on). This lasted for approx 3/4 of a mile before cresting and a nice 1 mile section of downhill brought us to an aid station and 10 miles. The aid stations themselves were either just water or fully stocked and were every 5K.  The rest of the race was on muddy undulating trails.

Half way came at 2:31 and I was 6 minutes down on last year but conditions were much worse. An aid station appeared at 14 miles and a few around me dropped out. This was just before a 1.3 mile long drag up hill that most of the course around me was walking. Last year I remembered I ran most of this hill but this year the legs were not there. 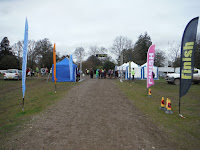 This pattern of long sweeping downhills and long long drags up hill continued. In particular we seemed to go up forever on a narrow very muddy section which was difficult to stand up on never mind go forward. 20 miles came on a fairly open up hill section and this was a prelude to the love station. This of course was just as I went the wrong way at one particular very muddy junction and luckily Jerry Fuber was there to call me back. At the love station there was shots, beer, cakes, sweets and kisses.  Sadly leaving this behind the last 6 miles had 3 significant climbs (all walked) and one very very steep slippy downhill. I met Fiona Mc Neilis on the last aid station she had picked up Kasia and they were running strong and just ahead of me. I made a big effort on the last climb back to the monument taking many places and stretched it in over the last 400m.

It wasnt my fastest time ever but never the less glad to get home.

Hot food was the reward and I joined Kasia and Fiona with my burger for a debrief after.

I really have forgotten how difficult these types of hilly muddy trail races are: