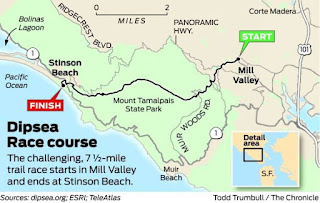 This is my second outing on this course which is over the famous Dipsea trail from Mill Valley to Stinson Beach just north of San Franciso. In the 35 runnings of this event it has only rained four times including my last outing in 2014. This was destined to be the fifth. The weather forecast was terrible and there had been a lot of storms passing through the area all week and a particularly bad one was due for the whole of the race.

I had been in the area all week and it being thanksgiving week there was a massive holiday atmosphere and we had a wonderful family event at the brothers place. Because of the predicted storm I decided to invest in a pair of trail shoes and picked up a bargain on Black Friday. Knowing it would be a risk running in new shoes I felt it was outweighed by the extra grip I would have got.

The predicted rain started over night before the race and effectively washed the trail away. The uphills were a river of fast flowing mud and the downhills were treacherous. Around 300 of us gathered in Mill Valley in advance of the race. Fewer than 250 would finish. At 8am we were off in damp and squally conditions. The rain stayed with us all day and got very heavy about 3hrs in for a couple of hours. In total we would climb around 10000ft which by far is the greatest of any events that I do. 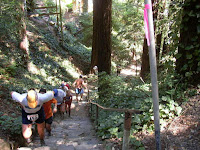 climbing up 600+ steps. being in the middle of the pack this was hiking due to weight of numbers. It was also quite slippy. Within the first mile we had already climbed over 700ft quickly getting out of the village and the big houses that skirt the route. Cresting we immediately start descending on a single track towards Muir Woods and its giant redwoods.  The field was still pretty bunched and as it was still a single track you really had to go at the pace of those around you. There was a big advantage to those at the front of the field.

I nearly came a copper at the steps into Muir woods and also crossing the river (via a log). Immediately we started climbing on an area called Dynamite which was just a mud bath and steep steep steep. For the next 2 miles it was a steady climb up with a river of mud coming straight down the middle of the trail. Large portions of this were unrunnable and it was a long hard hike. Cresting at Cardiac there was a well stocked aid station before we strarted the long steep decent to Stinson beach. This included a lovely flat section with panoramic views over the pacific before entering the

section called the rain forest which leads to the steep ravine steps which are a dangerous steep set of stone steps. Eventually you exit the forest and have a decent into Stinson beach and the turn around with another well stocked aid station. I managed the first turn around at 7.4 miles in 1:45. You immediately retrace your steps back to Mill Valley passing or being passed all the time. I was well under the 2hr cuttoff at this stage. Things were equally tough in reverse with many people falling en-route and there were lots of cut knees and legs on show. Dynamite in particular on the way down was a mud slide and impossible to stay on your feet. The second leg took 1:57 and at 3:41 for half way I was still well under the cut off of 4 hrs.

I found the 3rd leg back to Stinson beach particularly hard and lost concentration. When I eventually came close to the turnaround I took a right instead of a left and took a good few minutes to realise my mistake and retrace my steps to get to the timing mat. I crossed in 2hrs 9 mins but easily lost 5 minutes due to my mistake. This gave me precisely 2 hrs and 8 minutes to make it back to Mill Valley to avoid a DNF. 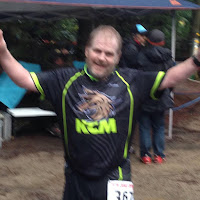 I kept good concentration in this 4th leg and at Cardiac got in with a bunch of other runners desperate to make the cuttoff and we all pushed hard taking lots of risks in the mud. as we came to the last section of the steps we had 15 minutes in hand and quickly navigated them to all come in around 7:55 and under the DNF cuttoff. My last leg being 2hrs and 3 minutes. This was 19 secs slower than the first running but given most others were 30 minutes or more slower than normal I was pleased.

No medals for this event but some super little momentoes and it still remains my favourite event. Similar to the last time it takes a lot longer to recover from this event and as I boarded the plane 2 days later I was still struggling walking.