100th Anniversary of the start of The Battle Of The Somme,  Samphire Hoe, Kent


This was back at the venue for the up and coming 100 mile attempt at Samphire Hoe between Dover and Folkestown at the reclaimed nature reserve made out of spill from the channel tunnel. The weather forecast was for showers and very windy. Fortunately there was little rain but it was still windy enough to need a jacket (in July). Some even had hats and gloves while other hard core guys (who no doubt forgot the jackets) were in vests. It wasn't cold.

Given the theme it was due to be a very poignant event and so it was. The planned start was exactly at the same time (7:30am) 100 years on from when the soldiers went over the top and after a nice speech by Traviss and a prayer we were set off in silence by trench whistles. You couldn't help but be moved.

The race itself was around the standard 3.85 mile loop which winded its way through the Samphire Hoe reserve before hitting the sea wall and for just over a mile we followed the wall out and the same back. There will be a slight change to the route for the 100 miler when the last twisty hill will be taken out by a further path around the periphery.

From the start/finish area we climbed for around 100m before a steep small downhill hillock on rough trail  crossing a bridge. Briefly we then climbed on the only tarmac section of the course for 100m. A sharp right brought us onto a steep downhill section again on rough trail towards the railway line. A well appointed flat trail for around 400m followed the railway and led to a very steep 100m downhill section that brought us to the sea wall. The sea wall itself was wide and concrete. On the

way out the wind was firmly in the back and for around a mile it was easy running. The only difficulty was avoiding waves as they crashed over the seawall and many got soaked. Turning at the far end of the reserve you retraced your steps (this time into gale) returning back to the start finish line and the fantastic aid station. The fudge queen Jackie Hearne was on duty and Eton Mess Fudge was the favorite for today.

It has to be said Somie Back had the most amazing outfit that was
very fitting for the day and I did not think at all that the skirt was too short. What a way to celebrate your 52nd birthday!

Today it was all about the wind and 30-40 steady mph winds were directly into the face for half the lap. It meant for a very slow race with very few breaking 4 hrs for marathon distance and most way off their normal pace. 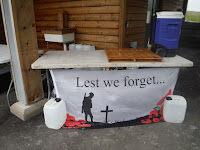 I was still on very tired legs (which was the plan) as this was my 6th Ultra in the last 28 days and the 12 hr 103K run was still well in my legs from last Saturday. But I was determined to run all 6 hours and the plan was likely to be around 9 laps. 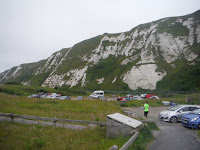 Around 100 were in the race with many finishing early with just the usual crew going to marathon distance. It was slow and tortuous stuff and I decided to walk the small 100m very steep hill every time.  This would be my strategy in the 100 miler. Virtually everyone else was as well.

A lot here today were in for the 100 miler and using this as the last long run before and there were a few doing this as day 2 of a 4 in 4 so there seemed to be no rush in the day.

I passed marathon distance in a very slow time (4:45) and kept going taking in 50K in 5:40 (including lots of practice walking). This gave me plenty of time to go out for one last lap finishing as nearly the last still on the course just over the 6 hrs. It was very quiet near the end.

So that is now 3 runs in Samphire Hoe and 3 times I have done 34 miles but this was by far the hardest and slowest. I do like this course unlike many others which is a good thing as I will be spending a lot of time here in 2 weeks time.

The EAMS top brass were here and I spent some time with Perter and Craig and La'Verne who seemed to really enjoy the Traviss and Rachel experience and of course the medal which was one of the best and weighing in at over 1lb in weight was a monster but very appropriate for the day that was in it.