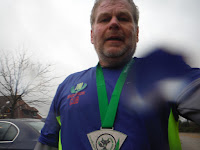 I was a bit unsure about today. I had a big week running over the holidays which started with a big sub 4 effort at the Phoenix River marathon on Monday and also included no less than 3 Fartlek sessions and 2 Park runs. So I was a bit knackered. The Park runs were in Basingstoke. Since the last time I ran there, the course had been modified to accommodate larger numbers, and it was now nearly all off road. I don't like the new course as much. Given the muddy week that was in it, it was a complete quagmire. Not surprisingly they were my two personal worst Park run times at 25 and 26 minutes respectively. But all good training for the Dublin Masters O50 Team XC in St Annes Park in Dublin next Sunday.

It was also to be my first visit to Enigma running and after researching the course which was 7 and a bit loops around Caldecotte Lakes in Milton Keynes I wasn't too keen. I find the looped runs quite lonely as you can spend a lot of time on your own. Milton Keynes was 1.5 hrs away and was pretty easy to find.

To top it all the weather forecast was pretty bad with heavy rain forecast. It wasn't cold.

However, I have to say I really enjoyed the day and "Foxy" certainly puts on a good show and I actually ended up loving the course. The course itself is right on the lakes and you get right up and personal with them on quite a few occasions.

About 50 started including some doing a back 2 back and some even doing 7 in 7 (more of them later). Not surprisingly a few hared off from the start. I soon found my place in the race in around 10th spot and stayed there for most of it. The race starts with approx a 1 km section that follows the end of the main loop to the aid station (finish) where you start the loop for real. The loop itself can be easily broken into sections by either flyovers or bridges (not one for Finn as I reckon there is north of 30 bridges on the route) and lakeside residences. You can see the finish on several occasions during the loop and you very quickly got the hang of things.

Its mostly solid path's with one 100 m grass section (that was waterlogged) and many puddles that had to be navigated around including one significant one that had to be bypassed. The wind was into the face at the back end of the loop and with you at the start/finish section. All in all quite straight forward.

The race started off in cold and drizzly conditions and for the first couple of hours stayed like that. But then the rain really moved in and the winds picked up and temperature dropped. For my last hour and a half it was pretty miserable with the rain getting heavier and heavier and was actually coming down sideways at the end. God help those poor marshals who must have froze today. There was a manual timing and lap counting system which given the numbers worked well. 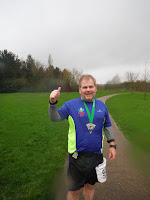 I actually ran this race blind today in that I didn't look at my watch once and tried to run within myself. As expected I was on my own for most of the day but after 2 laps I actually started to lap some people. I suspect these were the 7 in 7's and Back to Back people. There was great encouragement as you went past. I was only lapped myself by 2 runners with the first way out in front.

This told me that most people were struggling today. In particular I passed Paulo Gino who I see running in Ireland a lot, but haven't seen him since Denzil's races in July 2014. I also passed James Bennet who was trying a 7 in 7 and had ran sub 4 on Saturday. I passed Paul Sahota who was just back from hibernation in Barbados and was on a double. I passed Carolyn and Philip who were having a good chat on the way round and missing both their dog and camera. Lastly On the final push for the line I came up behind Brian Mills for the second time. Brian who now had ran over 1100 marathons is famous for being quiet and reserved and I was shocked as when I passed him he struck up a conversation. I was impressed that he knew who I was until it was clear he knew me as Brenda's friend. But I'll take that. He was on a 7 in 7 and I was surprised when he told me that he was doing it just to see if he was able. I guess we all have our unknowns. I sprinted for the line and was delighted to come across in 4:04:50 in what has to be said were very challenging conditions.

Some photo's courtesy of  Dee Rand.