There is no getting round it. I'm still gutted that I couldn't finish my personal challenge in Connemara a fortnight ago. It took months setting up what would have been a very special occasion. 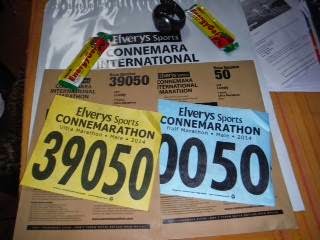 The Connemarathon Ultra is a bucket list race for me. But given the training and sacrifice you need to do it, I may never have the opportunity to compete in it again. This time round,  I had spent months training and knocking off my marathon count to make it happen. I uniquely had been allocated race no 50 and 39050 by Ray the race director. Many friends would have been there at all of the races. There would have been much elation, celebration and even presentations. Ahhhhh!!!!

But the running gods had chosen Stratford Upon Avon instead for my landmark run. Indeed it does prove that it was the right decision not to run in Connemara as I am back within 2 weeks. I could have really damaged myself if I had attempted it, and may well have failed to finish at all or at the very least had to walk it all, which would not have been fun. To get a calf tear in the last mile of the last training session just wasn't fair. But I have to stay positive and feel blessed that I am able to make the start line in Stratford at all, and so quickly after this injury.

Ironically the forced break from constant marathons was quite nice,. I was able to get along to see my club mates excel in both the national 10K and road relays championships, which was fun.

Today, I was back, and finally finished my challenge of 50 marathons before hitting 50, with 52 days to spare. I even managed to slip in under 10 years since my first marathon in Belfast 2004 by 2 weeks. Never in a million years when I thought up this challenge in Napa in Feb 2013 did I think I would succeed. It meant 28 marathons in less than 15 months. That was just nuts. As it turned out it took only 13 months as I had fallen in with a bad crowd. Unbelievable really. This is particularly unbelievable if you knew were I started 10 years ago after a life of much excess and debauchery :-), but that's another blog.

So I decided that I would make the most of the day, and enjoy this trail marathon through the supposed picturesque countryside made famous by Shakespeare. This was a fully accredited marathon by UK athletics and recognized by the UK 100 marathon club (lots of blue and yellow vests on show).


The weather was due to be nice and I was torn with what to wear. I eventually choose the now famous traveling Donadea 50K T, not least because it said 50 on it and it had the word "IRISH" emblazoned on the front. It's very important to have an identity when abroad. I thought by wearing my Crusaders vest in England so close to St Georges day was not sensible and could have been construed as fancy dress.

Central England was as bad as the south for comprehension of my accent and I struggled with that part of the day. It was an early start as Stratford was nearly 2 hrs from the house and the race started at 9am for the main field. There were many early social runner starters who had dribbled out from 8am. Most of these expected a finish north of 5 hrs.

Organisation of races in England are generally good from registration to after race activity. This one however was a bit more expensive at £24 and I struggled to see where they spent it.  It was a relatively small marathon with only 130 runners. Most seemed to have taken advantage of early starts and only around 50 of went off in the main pack at 9:00.  We started catching the early starters after mile 5.

The course was a figure of 8 with several sub loops on each half. It sounds complicated and in reality it was even worse. The race came with a navigation guide of 4xA4 pages with 10 point Times New Roman Font. And boy was it needed. It was the first race that I have ever needed to bring my reading glasses on. Even at that, there was at least 10 occasions where myself and those around me were stuck debating the way at various junctions with several occasions going the wrong way (it wasn't fantastically marshaled or taped). Several got very lost. This wasted an inordinate amount of time with at least 4 minutes on one stop of note when I had to wait for those behind to catch up before the debate started.

The worst thing about this course was the state of the ground. It was hard, very hard and from start to finish it was literally like running on concrete hard tractor tyre marks. It took 100% concentration  and even at that it was an ankle breaking, joint jolting and a muscle bashing experience. This slowed everything down frustratingly. There was no respite, and it will take several days getting over this battering. I seen many take tumbles including myself into a nettle bed. Thank you God for dock leaves.

It was also surprisingly hilly with nearly 1000ft of climb (not dissimilar to Connemara). The weather was great and I think we only got a small taste of what the London guys got last week.

The first loop was the most picturesque. Going through some small cute English villages including the one that Shakespeare is buried in. It was the hilly side of the course and the ground as described above was hard. It was slightly shorter at around 12 miles and I navigated it in 1:57. I found my place in the field around mile 5 and no-one passed my from that point on. I passed many.

The second loop was awful. It was 14 and a bit miles and had awful running conditions underfoot. It was also very agricultural. Mostly it just skirted farmers fields that were either in full bloom, freshly ploughed or just rotivated. The highlight was when we were treated to a Spitfire doing a low altitude aerobatic display. That was interesting. I spent some time running with Jack Brooks from the UK 100 marathon club who seems to have run every marathon on the planet and was just off to run the Big Sur in California. He asked me to put a big shout out to Collette O'Hagan and Eimear Hurley. He knew everyone in the race
and will be over in Ireland at Derry in June. I finished in 4:36 which I wasn't too bothered about because of the conditions but delighted that it was 6 minutes better than my first ever marathon. That at least was something. Then it was over . I came 35th and there were only 6 under 4hrs. I'm not sure I would do that one again.

The biggest and nicest surprise of the day was at the finish when a couple from Ireland came over to me because of the Donadea T. They both had run the race. It was Anthony O'Reilly from Cavan and his girlfriend who was no other than Eilis Connery who is the reigning EOI Killiegh marathon champion (I suspect she won here today as well). I had the honor of giving her the medal that day. They will be at the Kildare Arthur trail marathon in a few weeks. That was a really nice surprise.

So whats next. After discussion with coach Cottle I have decided that I need to speed up a little. One advantage of hitting 50 is that's it's a major new age group unlike 40 or 45. So I have a whole new world of age group running at all distances to look forward to. In addition Good For Age times relax a little for those races you need to qualify for. So I have decided to try for a Boston Qualifying time which for me now is 3:29:59 and if things really go well a GFA for London which is 3:19:59. My last 4 half marathons in 2013 all around 1:36 tell me it's possible, as long as I can get strong in the last 10K. In fact my 41:28 10K PB and 19:55 5K PB both also done in the last year promise even better. The Boston Qualifier is about a 25 minute improvement from where I am now and a 4 minute PB.

So it's back to Crusaders in July. I hope I haven't been forgotten (and I look forward to meeting the many new members), and will make a concerted effort for the autumn season. I'll target Dublin, but have a good go at both Berlin and Amsterdam en-route. In the mean time I'll use any other marathons I do as steps along the path to this goal while trying not to compromise it as well as try a few shorter distances.

However, I also want to keep doing many marathons, but will get a bit more choosy. Trying where possible to do new courses and repeat only those road races and courses I have really enjoyed and pass on those that I didn't (or are ridiculous value). I also want to do a lot more trail marathons and mountain marathons as they are really enjoyable without the pressure of racing.

I am going to be in Craughwell, Belfast and Kildare over the next 3 weeks for some celebratory laps with my running friends. They know me, the effort I put in, and the elation and frustrations and logistics required to run so many marathons in such a short space of time. I thank and salute you all.

To finish I would like to slightly modify a quote from the Bard himself as I could not have done this on my own.

"I have running in my life, and adventure and love. But mostly love. Thank you Lindsay, Ellie, Darragh and Libby."