This was a Saturday race and very convenient in Longparish in Hampshire only 15 minutes from the house down the A303.

This was the 3rd running of the race from Longparish to the Coombe Gibbet following the Test Way. Kick off was 9am and I arrived at registration around 8:15am. The race was run by The Ultra Magazine and there were a modest enough number there (around 40). Tea, Coffee were available inside Longparish community hall which was HQ for the day. As this was a cupless race I purchased a reusable cup and brought it with me.

1L Bladder was obligatory and this was the first time that I ran with a bladder. The race itself could easily be broken into 4, A 9 mile run to Hurtbourne Tarrent and CP1 and the a 7 mile out the the Coombe Gibbet before retracing your steps. There was a what I thought was a very generous cut off of 10 hours but it was very very hilly and so I can understand why the CP was there.

A very necessary briefing was had at 8:45 showing the type of signs to follow and we were off at 9am. The weather was lovely and I had decided before hand that I was not going to push too hard and enjoy the day. The trail was in good nick and there were lovely views all the way and it was very very rural.

I knew noone at the race.

After about 3 miles I missed my first turn in a gap in a hedge and Russ from behind called me back after going 100m off course.

Russ living in Newbury was training for the Robin Hood 100 miler in Sept and he had a strategy of walk the hills and run the rest.  I decided that suited me and we headed off together. Generally the terrain to the first CP was uphill until you come to outskirts of the village and for the last mile and a half you descend quickly and steeply through a forest section and the open field until you get to the village. The CP had everything that you needed. 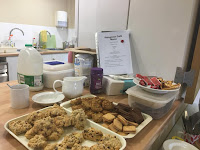 Heading off again with Russ we meandered our way along the Test Way.  After a few miles we came to a turn in a field with very poor sineage. For about 400m we ascended the field before loosing confidence and turned back to the last sign. Studying this closely we decided we were actually right first time round and climbed again. After about 800 there was another sign and we were back on track.

Half marathon came up while going through a small village and we started to notice runners coming against us on their way back. Soon after Russ ran ahead as he was way better on the down hill and I lost sight of him as we started to climb again toward the Coombe Gibbet. After transversing a forest we came to a junction. On the right was a near vertical hill up and the same on the left. I found the sineage confusing and decided on left. After about 10 minutes vertical climb I came to a forest and saw no markers. I was lost.  I carefully retraced my steps and and ended up back where I was at the junction. I then saw runners returning from the other way. Off I went after about a 20 minute detour.

It was tough going on the climb up to the Gibbet and most of the course passed my at this point on their way back. Seeing the gibbet in the distance Russ passed me on his return leg and I was on my own again. Running passed CP2 I rounded the Gibbet and stopped to refuel and refill my bladder and then headed off this time it being my turn to pass a few on their own journey. It took me 4hrs 20 mins to get to the turn around and I had it at 17.8 miles. 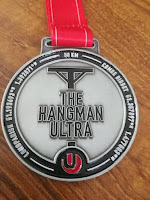 I made sure that I made no wrong turns on the way back and ran steadily, walking and climbing where necessary. I was easily under the cuttoff all day and when coming passed CP3 I had a good hour to spare.  I was however on my own and saw no other runners for the last 4 hrs of this race.

Even though the official distance was 54K I managed to do 57K in the end and came in at 8hrs 45 mins for to be honest was a reasonably comfortable run. Back in the hall there was soup, coffee, tea and a plethora of goodies and a nice medal.

I enjoyed today but it was a long hard tough race and thankfully the weather was nice.