Very late in the day I decided to enter this event. My recovery had been going well and I was going up the walls with frustration, and this weekend alone I had missed out on Tullaroan (the main event), Derry and Cork.

Marathon Club Ireland had decided to put on this event as because Cork had been moved the Sunday it left a day free. Rather than use the long 13.1 loop a smaller 3.5mile loop was measured and it was easy to marshal and only one aid station was needed.

As usual the start was at Tullroan AC and it was brilliantly organised by the Guthrie family and Lindsey was the RD for the day.

25 turned up which included most of the big number marathon runners in the country including David Brady, Larry Rigney, Ger Fay and Jerry Forde. In fact I believe that the average was well over 100 marathons across the field.

Also there was Catherine Gutrie (cheering on) and Aidan Hogan both on the Irish 24hr team for the up and coming world championships. 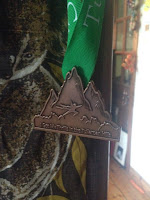 The weather gods were with us and even though it threatened rain all day it stayed dry. The course itself was hilly with >1500ft of climb over the 7 laps.

The lap was very straight forward we started by running around the periphery of the GAA club and headed out to the roads. Straight out of the gate was a long steep up hill that climbed for the guts of a mile. Turning left was down down down for 1 mile as we passed the "angry" sheepdog and the house with the water bottles left outside. A left turn kept us going down until to we came across a small bridge and tree covered section (and from time to time another angry dog). A short drag brought us back up into Tullroan village. A left turn before Seanie's brought us back to the GAA club. 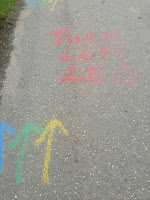 I found the route very interesting and enjoyable and I was on my own for the whole race. The hill up gave an enforced walk break and the rest was pretty much runnable. The aid station had everything and you passed the toilets every lap.

My knee felt OK today and I obviously have learned to strap it well. A steady 2:16 brought me through half way and 2:18 was a steady second half.

I'd say most of the field also had a double and treble marathon on this weekend and at the back there were a lot of tired legs but good fun.

After I finished there was a beer and showers and the main Tullaroan fantastic medal, if you wanted them. I didn't hang around too much and headed back to Dublin due to the bank holiday traffic. But that was the best value race in the country and counted for everything including UK marathon club, Road and Irish.

Funny of the day was because I got lost on the course last year, Vincent had painted "LEO turn left" in big red letters on the road for the main event. You a funny fecker Vincent.