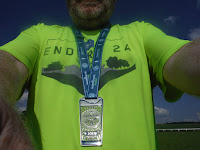 You have to ignore this time because of the week that was in it and it was a really hilly trail event anyway.

This run was based out of Kingsclere in North Hampshire and was only 20 mins away from the house. The route itself took us on a one lap tour of North Hampshire, very close to village Overton that I used to live back in the early '90's.

There was a half and a full event put on by the Basingstoke running club. As it traversed the infamous Watership Down the theme was rabbits. The only rabbit I seen all day was in a big costume at the start finish line. Did I mention it was due to be 30 degrees, windless and very humid.

I arrived early and parked up. It was a 10 minute walk to registration which was simple and I left a bag of drinks off for later (I knew that it was  a waste of time with the heat but did it anyway). Sean & Brenda arrived and had Maighread and Paul in tow from Dublin.  There was much talk of times and what had to be a mistake on the program of it taking 150% of normal. I thought that was about right. There was a lot of 100 mc members there as we had Tracey doing her 100th and even Anna was there after her SDW100 triumph last year. 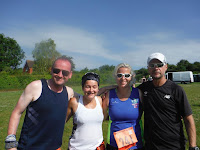 One of my first mistakes was wearing my Endure 24 T-Shirt as it was bright yellow and attracted millions of little black flies that absolutely covered me and to much amusement left everyone else alone.

At 10am we were off with a quick in and out of the forest and a trip around the car park before hitting the main hill for the day. It was vertical and described as barely walkable. The heat was also up so it was a slow start and the sweat was lashing off. After 30 mins I had just done over 2 miles. Naturally as I already had 130 miles in the legs from this week I was also completely knackered right out of the gate. 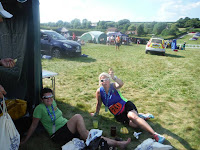 I was surprised at the hills on this course and though nothing as bad as the first they were relentless. There were lots of popup aid stations which were needed and I carried a 500ml bottle which was necessary. I was at the back of the pack all day.

Most of the course was off road on decent trails but there were some sections that were heavily rutted and difficult. I spent a lot of time on my own but did too and fro with Julia (who has lost a ton of weight) and Emine. I also chatted to Emma and Johnathon for a while who were dressed as rabbits. I ate a lot at the aid stations and drank everything I could get my hands on. I came through half way in 3hrs 15 and the pace didnt really pick up from there as the hills kept coming and coming.

There was supposed to be a cut-off at 16 miles but I was well under that.

I have little memory of the rest of the race as it all melded into one. I do however remember coming through 24 miles close to the Hannington TV mast and hearing and seeing the finish. Cruely as we ran down towards the melee we were directed back up towards the mast for quite a climb before coming back steeply on a tree routed unrunnable section back towards the start finish. I was delighted to get to the bottom and flatten out for the 800m run towards the finish. I was done.

Over the line we got a medal and engraved pint glass (with beer if you wanted) and a nice goodie bag.  There was also Cornetto's (50p and I had no money). Thankfully Gerry Fuber was there and got me it. Thanks Gerry.

Sean was in after an amazing 3:40 and age group winner and Maighread was just laughing at the difficulty. Eventually Brenda and Paul came in with Paul declaring that it was the most difficult thing that he had ever done.

I was really glad to get this one done and it is up there as one of the toughest.