I really have no idea why I did this event as I have done a track marathon once before that really did not go well and I did not enjoy it. It's not how they are organised, that is usually fine, its just the monotony and lack of atmosphere at the whole thing.


What tipped me was that Brenda, Sean and Kris had all committed to do it, so I did as well. 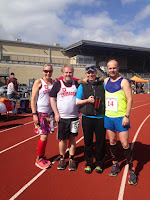 This particular event was in the K2 stadium in Crawley. This was a reasonably modern, fully equipped leisure center with integrated track and grandstand and all the facilities you would expect. The event itself consisted of a 24hr event which Kris and I were in, a 12 hour event that Brenda was doing and a 6hr event that Sean had entered. This was Sean and Brenda's second Crawley.

We set up our stall in the far corner of the stadium in what became known as the Irish corner which was a misnomer as Kris was from Australia and Sean from South Africa as well as Vanessa from England all sharing the facilities very kindly provided by Sean and Brenda. Seans children Sinead and Conor were there with Sinead in particular doing a good job all day crewing.

This meant for a busy but not too busy field. There were also all sorts and standards there, including some members of the elite GB ultra team who were preparing for the World 24 championships in Belfast in July. The amazing Ann Bath was also there who at over 65 years old is a shoe-in for the masters world title in Belfast and duly did well over 100 miles in this event. There were also a multitude of odd ball runners who I didnt know and came with an assortment of crew and amusing race tactics.

Kris and I were there representing our club Crusaders and had spent the morning shopping for empty calories and and settled on a melange of Coke, Rice pudding, more Coke, Iron Bru and Mountain Dew. Salt tablets still remain a topic of debate.

After a race briefing where we were told to give track priority to faster runners and if wearing head phones to use lane 2. This eventually had a very significant affect in that my own race was 6 miles further on my Garmin than the official distance which could be accounted for by running the whole race in lanes 2 and 3

There weere some celeb Ultra runners including Dan Lawson of Team GB, William Sichel, a multi-record holder and the first Brit to finish the world’s longest foot race within 52 days (3100 mile self transcendence race around 2 blocks in Queens New York), and Abichal Sherrington who has completed that same race 6 times among dozens of others from marathon to 1000 miles..  Here all of them talk in the podcast at the end of this blog.

At 12 noon we were off and the elites started spinning around in 6-7 minute miles. As the 6 hr event was on at the same time, their leaders also went off at frenetic pace. This included our Sean who was 2 miles in the lead after 3 hrs but faded slightly and ended up coming 4th overall. Also running great in the 6hr event was Ireland's own Nuala Smyth who won first lady. There was a very tight race for the top 2 spots in particular. Also going out at suicide pace was Georgina who was well under 4hr marathon pace for the first few hours. She slowed but held it together to complete 100 miles in 22.5 hrs and 3rd female over all.

We changed direction after every 4 hrs. The most exciting thing that happened was Kris nearly loosing her Ipod down the toilet. It was a long day. The weather became quite warm through the afternoon and most were running in T-Shirts and vests well into the night. Night came at 19:30 and the 12 hr race started at 20:00 under floodlights.

My own race started steady with the first marathon distance being around 4hrs 30mins . In fact I was fine until I hit 50k when as normal I went through a tough patch. I dropped down the field at this stage and was languishing in 18th spot over all. Kris also started strong tracking me through the first 6 hrs generally on the same lap. I shook of the bad patch and picked things up and by 100K was in 9th spot which I managed to keep to the end. My 50 mile times was 9hrs 30 mins and 100K was 12hrs 10 mins.

There were some really fast guys in the 12 hr race who were pushing each other and they hogged the inside lanes. After midnight, under clear skies it started to get very cold and at one stage absolutely freezing with a heavy dew soaking all of us and an hour of very freaky hanging mist. Eventually everyone (including Georgina) put coats on. I ran really well throughout the night knocking off the miles keeping well above my 4 mile an hour goal and getting closer and closer to the 100 mile target. Kris on the other hand after 50 miles started to have some tummy and sleep issues and took a nap and had to visit the first aid tent a few times. This cost her a lot of time off the track and her 100 mile goal disappeared with it. Meanwhile Brenda had a brilliant 12 hr event going well over 50 miles and 2nd lady home.


There was not really a lot else happened. Pam and Gill brought out food
on a regular basis but I turned it all down which was probably wise as I ended up with no nutrition issues despite hardly eating anything. The 12hr race finished at 8am and the track became quiet as quite a few of the 24hr people had finished already and the last 4 hrs became a death march for most. By my watch I passed 100 miles at 21:18:41 which would have been a huge PB (by well over an hour) but my official distance was much less but I was still comfortably under the 24hrs official despite walking the last 6 miles and barely making 3miles an hour.

Eventually I came in for 100 miles 23:12 and had to finish one more lap to get it recorded, which bought the finish time to 23:17. I immediately decided to stop as my goal had been reached. Most of the others decided to walk on gathering a few extra miles. I lost a few places in the overall standings because of this but that was a decision. Kris was back on the track at this stage and one of the few still running and eventually registered 82 miles for her efforts.

Showers, Buffet, prize giving and massage was all on offer afterwards. We packed up and left for a flight to Dublin.